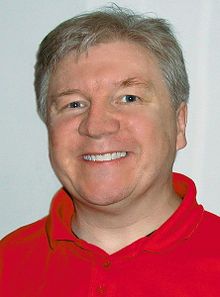 Michael Nugent is chairperson of the atheist group Atheist Ireland.[1]

in 2012, Ireland was ranked in the top 11 atheist populations in a survey which questioned 50,000 people from 57 countries across the globe.[2]

Ireland is on course to become the most obese country in Europe, according to the latest figures from World Health Organization (WHO) experts.[3]

On February 17, 2019, the online encycylopedia Wikipedia, which was founded by an atheist and agnostic, declared in an article entitled Irreligion in the Republic of Ireland:

Europe is heading for an unprecedented explosion in rates of obesity and excess weight — with Ireland at the forefront of the trend.[5]

A 2016 video documentary entitled From Europes' thinnest to Europes' Fattest - Ireland's obesity epidemic indicates that 40-50 years ago Ireland was the thinnest country in Europe, but now Ireland is facing an obesity epidemic.[6]

Two of the major risk factors for becoming obese according to the Mayo Clinic are poor dietary choices and inactivity.[8] According to the Gallup Inc., "Very religious Americans are more likely to practice healthy behaviors than those who are moderately religious or nonreligious."[9]

As noted above, in the United States at the present time, the greater the degree of irreligiosity in a generation, the higher their obesity rate is. According to the Gallup Inc., "Very religious Americans are more likely to practice healthy behaviors than those who are moderately religious or nonreligious."[11]

In addition, a significant number of prominent atheists are overweight (see: Atheism and obesity).

Research indicates that heavy drinking may contribute to obesity. For example, a study found that frequent, light drinkers (3 to 7 drinking days per week, 1 drink per drinking day) had lower BMIs than infrequent, but heavier drinkers.[13]

At least 100 studies suggests religion has a positive effect on preventing alcohol-related problems, researchers Christopher Ellison, Jennifer Barrett and Benjamin Moulton noted in an article in the Journal for the Scientific Study of Religion on “Gender, Marital Status, and Alcohol Behavior: The Neglected Role of Religion.”[14] See: Atheism and alcoholism

Michael Nugent is chairperson of the atheist group Atheist Ireland.[16]

Videos featuring an overweight Michael Nugent can be found HERE and HERE.