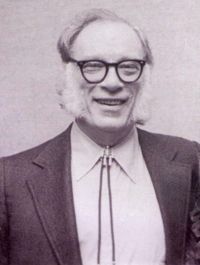 According to The Cryonics Society, Isaac Asimov said of cryonics, "Though no one can quantify the probability of cryonics working, I estimate it is at least 90%..."[1]

Isaac Asimov (January 2, 1920 - April 6, 1992) was a popular American science fiction writer and a professor of biochemistry at Boston University. He was also an atheist who was of Jewish descent (or more strictly Humanist) of Russian descent, whose parents emigrated to the United States from the Soviet Union when he was three years of age.[2]

He celebrated his birthday on January 2, but might have been born as early as October 4, 1919.[3] The family arrived in New York City on February 3, 1923.[4] He is often viewed as one of the "Big Three" of so-called classic science fiction, along with Arthur C. Clarke and Robert A. Heinlein, both of whom he viewed as friends.

While he is predominantly viewed as a science fiction writer, he produced works on many subjects both fiction and nonfiction; of particular note are his works on astronomy and his books of collected essays. He also earned a doctorate in chemistry from Columbia University in 1948.[5][6] Asimov was one of the most prolific writers of the Twentieth or, indeed, any century; a conservative estimate puts him as the author of more than three hundred books.

Though he was never vocal against religion, he had little tolerance for those he viewed as crackpots, such as strict creationists, and viewed Judaism and Christianity both as mythologies comparable to Greek myth and other folklore. Despite this, he viewed the Bible itself as a notable work of literature, publishing several nonfiction books about both the Bible and the Book of Ruth, among others. According to The Cryonics Society, Asimov said of cryonics (a non-theistic pseudoscience which attempts to extend life after a person is legally dead), "Though no one can quantify the probability of cryonics working, I estimate it is at least 90%..."[7] See: Atheism and cryonics

The works which tend to be most strongly associated with him remain I, Robot, a collection of his short stories about the existential dichotomy of artificial intelligence (which was somewhat less-than-faithfully recreated in the Hollywood title of the same name starring Will Smith), as well as the Foundation series, a work sometimes viewed as the first in the genre of "future histories". He died on April 6, 1992 of complications due to AIDS, which he contracted via a tainted blood transfusion during a heart bypass operation.