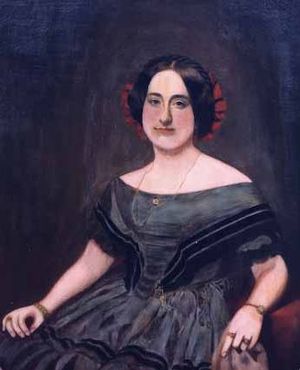 Miriam Nones Andrews; the Nones family, like the Andrews family, was connected to Philadelphia.

American Jewish communities across the USA

In the 1940s Jews comprised 3.7% of the US population. Today the population is about 5 million—under 2% of the national total—and shrinking because of small family sizes and intermarriage. The largest population centers are the metropolitan areas of New York (2.1 million in 2000), Los Angeles (668,000), Miami (331,000), Philadelphia (285,000), Chicago (265,000) and Boston (254,000). With the large-scale immigration of Jews from Germany in the nineteenth century, Jews established themselves in many small towns and cities across America. A much larger immigration of Eastern European Jews between 1880-1914 brought a large, poor, traditional Jewish population to New York City. At World War II and after, a large number of Jewish refugees arrived from Europe; many also arrived from the Soviet Union after 1970.

New York City's Jewish population in 2001 was near 2 million. New York City is the largest single Jewish community in the world (considering, single as "within municipal limits"). First Jewish presence in New York was formed with Jews (from the Netherlands) relocated from Brazil; around 1900 the Lower East Side was home to a flourishing Jewish community of Germans, Russians and Greeks. The Lower East Side Tenement Museum, a landmark built in 1863, tells some stories of immigrants.

The Jewish Week, one of the most respected Jewish newspaper in America, is published in New York. It covers news and features about Jewish world for Manhattan, Long Island, Queens, Westchester/The Bronx and Brooklyn/Staten Island. Other important newspapers are The Jewish Post and The Jewish Daily Forward. The Jewish Museum is located in the 5th Ave. There is also a Jewish Radio.

The Center for Jewish History in New York embodies a partnership of five major institutions of Jewish scholarship, history, and art: the American Jewish Historical Society, the American Sephardi Federation, the Leo Baeck Institute, the Yeshiva University Museum, and the YIVO Institute for Jewish Research; with combined holdings of approximately 100 million archival documents, a half million books, and thousands of photographs, artifacts, paintings, and textiles the Center has an important mission: To foster the creation and dissemination of Jewish knowledge and to make the historical and cultural record of the Jewish people readily accessible.

After 1945 many northeastern Jews moved to Florida, especially to Miami, Miami Beach, and nearby cities. They found familiar foods and better weather, and founded more open, less tradition-bound communities, where greater materialism and more leisure-oriented, less disciplined Judaism developed. Many relaxed their religiosity and attended services only during Rosh Hashana and Yom Kippur. In South Florida synagogue affiliation, Jewish community center membership, and per capita contributions to the United Jewish Appeal and the Jewish Federation are among the lowest of any Jewish community in the United States.[1]

In 1900, five of seven clothing merchants in Clarksburg, West Virginia, were Jewish, and into the 1930s the Jews here were primarily merchants. Because of the need to expand their synagogue, the Orthodox Jewish congregation merged with a smaller Reform group to form a compromise Conservative congregation in 1939, and Jewish community life in Clarksburg centered around this synagogue. The community, which reached a population peak of about three hundred in the mid-1950s, is still represented by about thirty families.[2]

The Jews of Wichita, Kansas, fashioned an ethnic-religious world that was distinct, vibrant, and tailored to their circumstances. They had migrated west with capital, credit, and know-how, and their family-based businesses were extensions of family businesses in the east. They distinguished themselves in educational, leadership, and civic positions. Predominantly German Jews through the 1880s, their remoteness and small numbers encouraged the practice of Reform Judaism, which in turn increased their interaction with non-Jews and hastened the erosion of their heritage. The arrival of conservative Jews from Eastern Europe after the 1880s brought tension into the Wichita Jewish community, but also stirred an ethnic-religious revival. The German Jews were well-respected in the Wichita community, which facilitated the integration of the Eastern European newcomers. The Jewish community was characterized by a "dynamic tension" between tradition and modernization.[3]

Reform Jews, predominantly German, became Nashville's largest and most influential Jewish community in the first half of the 20th century; they enjoyed good relations with the Orthodox and Conservative congregations. Some German Jewish refugees resettled in Nashville from 1935 to 1939, helped by prominent Nashville families. Both the Orthodox and Conservative congregations had relocated their synagogues to the suburbs by 1949, and the entire Jewish community had shifted southwest by about five miles. Although subtle social discrimination existed, Nashville's Jews enjoyed the respect of the larger community. Public acceptance, however, required complicity in racial segregation. The Observer, Nashville's weekly Jewish newspaper, tried to find a middle ground between assimilation and particularism, but after years of calling for group solidarity, accepted that the Jewish community was pluralistic.[4]

The development of Jewish (particularly Orthodox) student life at Princeton University improved rapidly since the end of World War II, when Jewish students were few and isolated. In 1958 Jewish students were more numerous; they protested against the Bicker system of eating club member selection. In 1961 Yavneh House was established as Princeton's first kosher kitchen. In 1971 Stevenson Hall opened as a university-managed kosher eating facility in the midst of the older private eating clubs. Jewish student initiative and Princeton administration openness deserve credit for this progress.[5]

The Jewish community in Oakland, California, is representative of many cities. Jews played a prominent role, and were among the pioneers of Oakland in the 1850s. In the early years, the Oakland Hebrew Benevolent Society, founded in 1862, was the religious, social, and charitable center of the community. Later, the first synagogue, founded in 1875, took over the religious and burial functions. Jews from Poland predominated in the community, and most of them worked in some aspect of the clothing industry. David Solis-Cohen, the noted author, was a leader in the Oakland Jewish community in the 1870s.

Oakland's Jews were pushed hard to excel in school, both secular and religious. Fannie Bernstein was the first Jew to graduate from the University of California at Berkeley, in 1883. First Hebrew Congregation sponsored a Sabbath school which had 75 children in 1887.

Oakland Jewry was active in public affairs and charitable projects in the 1880s. Rabbi Myer S. Levy was chaplain to the state legislature in 1885. The Daughters of Israel Relief Society continued its good works both inside and outside the Jewish community. Beth Jacob, the traditional congregation of Old World Polish Jews, continued its separate religious practices while it maintained friendly relations with the members of the first Hebrew Congregation.

Able social and political leadership came from David Samuel Hirshberg. Until 1886 he was an officer in the Grand Lodge of B'nai B'rith. He served as Under Sheriff of Alameda County in 1883 and was active in Democratic party affairs. In 1885 he was appointed Chief Clerk of the US Mint in San Francisco. As a politician, he had detractors who accused him of using his position in B'nai B'rith to foster his political career.[6]

When refugees from the fire-stricken, poorer Jewish quarter of San Francisco came to Oakland, the synagogue provided immediate aid. Food and clothing were given to the needy and 350 people were given a place to sleep. For about a week the synagogue fed up to 500 people three times a day. A large part of the expenses were paid by the Jewish Ladies' organization of the synagogue.

About 32,000 Jews are believed to reside in the Palm Springs area, said the United Jewish Congress of the Desert. The world-famous desert resort community has been widely known for its local history of American Jews starting with Hollywood celebrities and businessmen like Walter Annenberg visited Palm Springs in the 1930s and 1940s.

Annenberg, one of the first known billionaires opened the Tamarisk Country Club in 1946, in part due to his personal experiences with anti-Semitism and discrimination, like he was refused membership in the Los Angeles Lakeside country club because of his "Jewishness". But his connections with Hollywood and corporations alike made his country club a success, and made it a policy to allow Jews and all people, regardless of race and religion, to have access to his facility.

Many elderly American Jews from the East coast and the Los Angeles metropolitan area, come to retire in the Coachella Valley, in golf course and mobile home communities, and later in the 20th century to become a large component of demography in the desert resort. A few local Jews are involved in local politics and even are partners with congressmen, presidents and world leaders.

There are 12 known Jewish places of worship, including a Jewish community center in Palm Desert (some demographic experts stated 25% of the population is practicing in Judaism and of Jewish descent) based on self-education in reliigous traditions and recreation opportunities, open especially for youth of all races and creeds.

Palm Springs has the annual "Winter Festival of Lights" parade, which began as a separate parade to celebrate Chanukah in the 1960s. Over time, that and the Christmas-themed parade merged into the one celebrating the season's lights of menorahs, Christmas trees and the calendar new year.