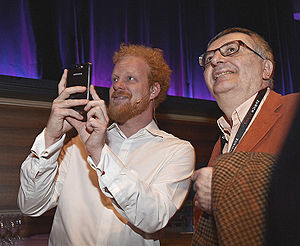 John Nicholas Gray (born April 17. 1948) is an English political philosopher and author who focuses in the areas of analytic philosophy and the history of ideas. Gray retired as School Professor of European Thought at the London School of Economics and Political Science. Gray is an atheist who is critical of New Atheism.[1]

Gray is also a columnist who contributes regularly to The Guardian, The Times Literary Supplement and the New Statesman, where he serves as the lead book reviewer.

John Gray's review of The Twilight of Atheism

John Gray in The Independent said "The decline of secular thought is the subject of Alister McGrath's provocative and timely The Twilight of Atheism. (...) His aim is not so much to analyse atheism as demolish its intellectual credentials, and in this he is largely successful."[2]