John William Waterhouse (Rome 1849 - London 1917) was an English painter and draftsman during the Pre-Raphaelites era; among the most popular Victorian Artists. Most famous for his paintings characters from myth and legend and his paintings of female characters (tragic or powerful femmes fatales). Waterhouse learned his trade from his father, who was also a painter.

In 1870 Waterhouse joins The Royal Academy Schools of London. Only two years later, in 1872, he exhibits his works at the Society of British Artists and in 1874 at The Royal Academy. After a period inspired by the classic subject matter (like Alma Tadema), from 1880, he initiates a creative stage based on purely literary topics. [1]

Waterhouse was an eclectic painter. He painted Pre-Raphaelite pictures in a more modern manner. He was in fact a kind of academic Burne-Jones [1833-1898], like him in his types and moods, but with less insistence on design and more on atmosphere. His art was always agreeable, for he had taste and learning as well as considerable accomplishments. [2]

His latter painting reveals his interest in plein-air painting and genre scenes.

Although much is known about his painting life, next to nothing is know about his private life. In 1883 he married Esther Kenworthy. 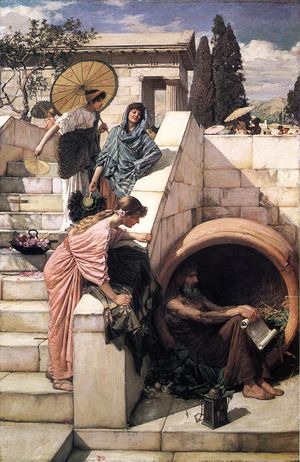 Tristan and Isolde with the potion, ca. 1916.
Retrieved from "https://conservapedia.com/index.php?title=John_William_Waterhouse&oldid=1341837"
Category: