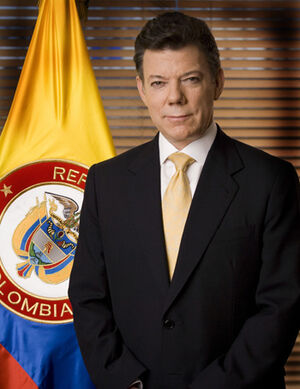 Juan Manuel Santos Calderón (Bogotá, August 10, 1951 - ) was the 59th President of Colombia between August 2010 and August 2018 (who succeeded Álvaro Uribe and was suceded by Iván Duque). Santos was a cadet at the Navy Academy in Cartagena; he studied Economics and Business Administration and carried out graduate studies at the London School of Economics, Harvard University and the Fletcher School of Law and Diplomacy.

Santos was Chief of the Colombian delegation before the International Coffee Organization (ICO) in London and served as a minister in the cabinets of Presidents Cesar Gaviria and Andrés Pastrana; he was Colombia’s first Foreign Trade Minister. He has also been Finance Minister and National Defense Minister. During this last position, he was in charge of leading the implementation of the government’s Democratic Security Policy.

Santos created the Good Government Foundation (Fundación de Buen Gobierno) and founded the political party Partido de la U in the year 2005; currently Colombia’s largest political party. As a journalist he was a columnist and Deputy Director of the newspaper El Tiempo; Santos was awarded the King of Spain Prize and was president of the Freedom of Expression Commission for the Inter American Press Association (IAPA). He has published several books, among which the most significant are The Third Way, co-written with the former British Prime Minister Tony Blair, and Check on Terror (Jaque al Terror), where he describes the most important actions against the "FARC" terrorist group during his tenure as head of the Ministry of Defense.

On June 20, 2010, (after obtaining the largest vote during the first round of the presidential elections which took place on May 30 of the same year) at the second round of the presidential elections, he was elected President of the Republic of Colombia for the four-year period between August 7, 2010 and August 7, 2014. He obtained more than 9 million votes, the highest amount obtained by any candidate in the history of Colombian democracy.

During his campaign, he promised to lead a government of national unity that would carry out the transition from Democratic Security to Democratic Prosperity.

President Santos is married to María Clemencia Rodríguez, with whom he has three children: Martín (21), María Antonia (19) and Esteban (16).[1]

He comes from an influential Colombian family. His great-uncle, Eduardo Santos, was president from 1938 to 1942 and owned the country's largest newspaper, El Tiempo. His cousin, Francisco Santos, was vice-president.[2]