From Conservapedia
(Redirected from KJV)
Jump to: navigation, search 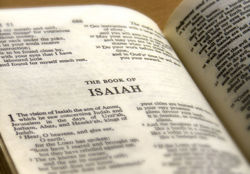 The King James Version (also called the Authorized Version, or, in older texts, the English Bible, our English Bible, and sometimes the She Bible) of the Bible is a poetic masterpiece that has profoundly influenced the English-speaking world ever since its publication in 1611. It was the culmination of seven years of work (1604–1611) by about fifty English scholars and around twenty Church of England bishops, as authorized by King James I of England. The result was It was not the first English translation (William Tyndale had previously translated the Bible into English, and much of the Authorized Version was taken from Tyndale's version) nor was it the most accurate (some modern translations benefit from better, more conservative sources). Debate exists concerning the accuracy of the translation. But the King James Version of the Bible was the most majestic and it has inspired English literature from Herman Melville to Henry Wadsworth Longfellow to the Rev. Martin Luther King, Jr.

For example, many cite Rev. Martin Luther King's "I Have a Dream" speech without acknowledging its source in the translation of Isaiah 40:4:

The King James translators described it as "Newly Translated out of the Original tongues."[1] The King James Version of the Old Testament was based on the Hebrew Masoretic text, codified in the Middle Ages. The New Testament was primarily based on Greek texts predating the Latin Vulgate. It also used the Textus Receptus, a Greek text compiled by Erasmus in the 16th century on the basis of 12th-century Byzantine manuscripts. The translators explicitly acknowledged making use of previous English translations, however, and the Catholic Encyclopedia describes it as being essentially the Bishops' Bible, corrected by comparison with the Hebrew and Greek texts.[2] F. H. A. Scrivener, however, notes many passages which correspond to the Latin Vulgate rather than the Greek.[3] The King James Version is freely and fully available for searching online.[4]

A recent attempt to "update" the King James Version was the New King James Version, which most notably modernized pronouns such as "thou" and verb forms such as "art". Keeping "thou"s, however, is helpful, since it clarifies whether the speaker is addressing one or multiple people, a distinction modern English no longer makes. The NKJV has been called a "transition Bible." These newer translations use a Greek text based on manuscripts not known in 1611. This text, called the Critical Text, was compiled by B.F. Westcott and F.J.A. Hort in 1881 and is updated regularly. It is based on two early manuscripts, Codex Vaticanus and Codex Sinaiticus. A list of about 20 minor verses in the King James Version which are not in the earliest manuscripts discovered after publication of the KJV is available here.

Some Christians believe that the original Authorized Version of the King James Bible is the only acceptable English translation of the Bible.[5] This is referred to by some Christians, especially those who do not hold to this viewpoint, as the "KJV-only movement," while internally, these Christians call themselves "Bible Believers." On the other side of the debate, many Christians avoid the King James Bible because of its archaic language, advances in scholarship's understanding of ancient languages, and discovery of (arguably [6]) more reliable manuscripts. Note that the King James Bible uses British spellings like "favour" rather than "favor" (Acts 2:47).

The King James Version uses a total vocabulary of only about 8,000 words.[7] In contrast the English Standard Version, published nearly four centuries later in 2001, draws upon a larger English vocabulary that developed in the interim and uses nearly 14,000 different words.

Although the NIV is the bestselling Bible today, a study found that the AV is more likely to be read than the NIV by a 5:1 ratio.[8]

The King James Version frequently and repetitively uses "and" (and also "but") to begin a sentence. For example, seven straight verses—Luke 4:11-17—begin with the word "and"; ten straight verses—Luke 4:58-67—also begin with the word "and", and perhaps more than half of the verses in the entire Gospel of Luke use that now-disfavored beginning. The King James Version also frequently uses "behold", which is poetic. One of its most common words is "spake" (archaic form of "spoke"), which it uses 644 times.

Like Shakespeare, who wrote his plays shortly before the KJV was written, they use the archaic "anon" to mean "very soon." See, e.g., Mark 1:30.

The King James Version does not make full use of the possessive form, instead often spelling things out to more clearly translate. See, for example Luke 5:33: "And they said unto him, Why do the disciples of John fast often, and make prayers, and likewise the disciples of the Pharisees; but thine eat and drink?" [9]

Instead, the AV is based on the majority of the manuscripts, which agree extremely well, as opposed to modern versions, which are based upon some few older manuscripts which disagree greatly between themselves. The oldest manuscript fragment, dated to A.D. 66, agrees with the reading used by the AV.[1] The Use of the Masoretic Text for the Old Testament was proven right by the discovery of the Dead Sea Scrolls in 1948.

The translators were predominantly literary types, such as poets, without much input from scientific types who might have recommended some wording having more physical connotations, or linguistic scholars who could point out the details of scientific terminology. For example, "owph" is translated as "fowl" rather than the linguistically and scientifically correct "winged creature."

The "archaic" language in the KJV is sometimes more understandable than in other versions. Gail Riplinger discovered a "hidden dictionary" in the KJV that would enhance one's vocabulary by reading it. The King James Bible also contains a "code" that other versions don't. For example, "word of God" is found seven times and "Most High", seven times. the Word of God (or its alternative word of the Lord) is Jesus himself. Shiloh (the capital of Israel before Jerusalem), meaning "Messiah", is found 33 times, the age at which Jesus died. Shiloh was destroyed. If one adds the 33 times Shiloh is mentioned to the 667 times Jerusalem is mentioned in the Old Testament, one gets 700 times the capital of Israel is mentioned in the Old Testament. Jerusalem is mentioned 144 times in the NT, as in the 144,000 of Revelation. This is not so in modern versions.

The KJV was translated at the order of King James by a team of Bible-believing Nazarenes, in contrast to the NIV, for example, which had homosexuals on its translation team, who removed the word "sodomy" from the Bible. The KJV translators consulted six previous English versions, in fulfillment of Psalm 12:6. The translation process lasted seven years, ending in 1611.

54 scholars were assigned to the project, but 47 participated more than the others, all highly qualified. Among them were Dr. John Bois, who, according to his biographer, was reading through the Hebrew Old Testament at only five years old. He was an expert in all forms of Greek, and compiled one of the largest Greek libraries ever. Lancelot Andrews, a leader of the Old Testament translators, was fluent in 15 modern languages, as well as Greek, Hebrew, and the cognate biblical languages. Dr. Andrew Downes spent 40 years as Regius Professor of Greek at Oxford University. Sir Henry Saville was a scientist and Bible scholar. Dr. John Harding was Regius Professor of Hebrew at Oxford University. Edward Lively was Regius Professor of Hebrew at Cambridge. Dr. William Bedwell was an expert in Arabic, Latin, and Persian, and prepared lexicons in these languages and in biblical languages.[10]

If at any time the translators were unsure of how to translate something, they would send word out to all the learned men of England for aid, thus having transparency in their work.