King had a personal friendship with then-Vice President Richard Nixon which helped propel King into a prominent role in the civil rights movement and the national spotlight.

On Dec. 31, 1955, he led the nonviolent boycott of city buses of Montgomery, Alabama, after Rosa Parks was arrested for not moving to the back of the bus.[2]

Vice President Richard Nixon invited King to Washington, D.C., for a meeting on 13 June 1957. This meeting, described by Bayard Rustin as a “summit conference,” marked national recognition of King's role in the civil rights movement (Rustin, 13 June 1957). Seeking support for a voter registration initiative in the South, King appealed to Nixon to urge Republicans in Congress to pass the 1957 Civil Rights Act and to visit the South to express support for civil rights. Optimistic about Nixon's commitment to improving race relations in the United States, King told Nixon, “How deeply grateful all people of goodwill are to you for your assiduous labor and dauntless courage in seeking to make the civil rights bill a reality.” Sen. John Kennedy voted against the 1957 Civil Rights Act, which created the Justice Department's Civil Rights Division.

Rev. King wrote his most famous writing, “Letter From A Birmingham Jail” (1963), while imprisoned for demonstrating against segregated eating facilities.

Rev. King's most famous speech, delivered to a huge crowd gathered in Washington, D.C. in 1963, chanted the refrain "I Have a Dream" of an end to segregation and discrimination. It was a brilliant Christian sermon that drew upon verses and images in the Bible,[3] ending in "Thank God Almighty, we are free at last!"[4] In 1964, Rev. King was awarded the Nobel Peace Prize. Rev. King was assassinated by James Earl Ray on April 4, 1968 in Memphis, Tennessee.

"As the Apostle Paul carried the gospel of Jesus Christ ... so am I compelled to carry the gospel... I must make two honest confessions to you, my Christian and Jewish brothers ...

I stand in the middle of two opposing forces ... One is a force of complacency ... The other force is one of bitterness and hatred, and it comes perilously close to advocating violence. It is expressed in the various black nationalist groups ... the largest being Elijah Muhammad's Muslim movement.

Nourished by frustration over racial discrimination, this movement is made up of people who have lost faith in America ...

I have tried to stand between these two forces ... for there is the more excellent way of love ...

One day the South will know that when these disinherited children of God sat down at lunch counters they were standing up for what is best in the American dream and for the most sacred values in our Judeo-Christian heritage."

"Whenever this issue of compensatory or preferential treatment for the Negro is raised, some of our friends recoil in horror. The Negro should be granted equality, they agree, but he should ask for nothing more. On the surface, this appears reasonable, but it is not realistic. For it is obvious that if a man enters the starting line of a race three hundred years after another man, the first would have to perform some incredible feat in order to catch up."

King supported the existence of the Jewish State Israel.[6] He also supported natural family planning and opposed abortion,[7][8][9][10] as well as homosexuality.[11]

King was educated at Boston University, where he earned his advanced degree in theology. Years later, a committee of scholars appointed by the university concluded that some passages in his PhD dissertation had been plagiarized,[12] A book about the plagiarism was published by Pappas.[13] According to Ron Grossman, a Chicago Tribune staff writer:

By 1966 his attacks on the Vietnam War led to a break with Lyndon Johnson and the labor unions that had been his base of support in the white community (along with the liberal churches).

Dr. King's monumental speech at a huge gathering in Washington, D.C., electrified the nation. Many people who had not previously considered equal rights for blacks to be an important issue were impressed with the many points he made in his speech about racial discrimination. His eloquent theme of "Let freedom ring" (reminiscent of Archibald Carey's 1951 sermon)[16] likewise motivated many Americans, particularly white Judeo-Christians, to take up the cause of integration. 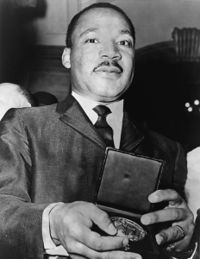 Time and time again, liberals claim that MLK was a Democrat. Liberals point to the people he associated with or that he opposed Barry Goldwater as proof that MLK was a Democrat. There is considerable evidence that he was not a Democrat. Martin Luther King Sr. was a Republican, that would almost certainly make his son a Republican. Only after his son was arrested did King Sr. plead to President Kennedy for his safe release. It is noted at that point MLK Sr. switched parties to support Kennedy. This despite Kennedy voting against the 1957 Civil Rights Act and being initially opposed to the 1963 March on Washington by Dr. King. The March on Washington was organized by A. Phillip Randolph, who was a black Republican. In addition, Attorney General Robert Kennedy allowed the FBI to wiretap MLK Jr's phone due to suspicion that Dr. King's associates were Communist and pry into his personal life; this was later expanded during Lyndon B. Johnson's presidency; which undermined King.[17][18]

It was the Republicans who led the way to free the slaves nearly one-hundred years earlier; that fact was not lost on his generation. Frances Rice, chairman of the National Black Republican Association said, [he] "absolutely was a Republican," and "We were all Republicans in those days. The Democrats were training fire hoses on us, siccing dogs on us."[19] In the 1960s, King would have witnessed the Democrat parties position on pro-segregation, against the Civil Rights Act. King was most likely aware of high-profile Democrats such as Al Gore Sr. and the Exalted Cyclops Robert Byrd voting against repealing segregation. Southern Democrats rallied around Jim Crow laws and Black Codes which were targeted against King's message. Dixiecrats blocked the social and political progress of black Southerners for decades. Was King unaware? Doubtful. It was Republican President Eisenhower who began the push for integrating all-white schools and the desegregation of the military. To think King was a witness to all the upheaval Democrats caused and then became a champion of Democrats is a stretch.

King did at least at one point choose not to publicly endorse either party. While speaking at Bennett College in 1958, for example, he emphasized the importance of voting. However, he was careful to specify that he was not supporting either political party specifically, nor thought that either one was perfect.

There has been some speculation that Martin Luther King Jr. was a Communist, namely due to having ties to and funding from the Communists, including Bayard Rustin. In addition, an FBI investigation also uncovered a photograph of King possibly attending a communist workshop in Georgia, which was published by the Augusta Courier. King has also mentioned once that he viewed things "from a dialectical viewpoint."[21]

The FBI was under written directive from Attorney General Robert F. Kennedy when it began wiretapping King's telephone line in the fall of 1963.[22]

John Kennedy was concerned that public allegations of communists in the SCLC would derail the administration's civil rights initiatives. He warned King to discontinue these associations and later felt compelled to issue the written directive that authorized the FBI to wiretap King and other SCLC leaders. The FBI used the incidental details caught on tape over the next five years in attempts to force King out of his leadership position, in the COINTELPRO program.[23]

On the other hand, King had written a speech indicating that Communism and Christianity cannot be mixed together.[24] In addition, his personal friendship with Nixon, the latter of whom had been instrumental in exposing Alger Hiss as a communist spy, would have made any adherence to Communism very unlikely.

Rathbun (1968) shows the theological basis for King as a social reformer derived from four sources: the Social Gospel of Walter Rauschenbusch, the Protestant Neo-Orthodoxy of Reinhold Niebuhr and Paul Tillich, Personalism taught at Boston University, and Gandhi's concept of nonviolent love. King's synthesis of these four sources supported his civil rights activities. Laws may be broken, said King, if they are unjust laws which do not conform to eternal, natural law. Jesus, said King, was a true revolutionary who brought peace as a "presence of justice" instead of an "absence of tension." The church also must be revolutionary to counteract evil and bring about social justice. King's theology of social action foresaw complete, unprejudiced equality based on natural rights and privileges.[25]

According to his doctoral papers, King denied several key Christian doctrines, including Christ's omniscience, the "orthodox view of the divinity of Christ," and his birth of a virgin, among other doctrines.[26]

On April 3, 1968, King attended a rally in Memphis, Tennessee in support of local black sanitation workers who were striking due to a wage imbalance with white colleagues. The following evening, he was standing on the balcony outside his room at the Lorraine Motel when a shot rang out. King was hit in the face and rushed to a nearby hospital where he was pronounced dead at 7:05 p.m. He was 39 years old.[27]

News of King's death spread quickly and sparked riots in 100 U.S. cities. President Lyndon Johnson pleaded with Americans to refrain from violent demonstrations, saying "I ask every citizen to reject the blind violence that has taken Dr King." Presidential candidate Robert Kennedy was also vocal in pleading for peace.[28]

King's assassin, a white ex-convict named James Earl Ray, successfully eluded police for two months. He fled to Canada, where he lived under the alias Ramon George Sneyd. He was arrested on June 8, 1968 and confessed to the crime, for which he received a sentence of 99 years in prison.[29]

Although King is generally embraced by the American cultural establishment today, he and the authorities did not always have such a cordial relationship. In 1967, King called the United States "the greatest purveyor of violence in the world today." The FBI, under the direction of J. Edgar Hoover, kept King under surveillance from 1961 until his death in 1968. The Bureau tapped his phones and bugged his hotel rooms. The FBI did not end its surveillance of King's wife, Coretta Scott King, until many years after her husband's death.

Because of this, and despite Ray's confession to the murder, both Jesse Jackson and King's son Dexter Scott King have both said there was a government conspiracy to murder the civil rights leader. Jackson wrote the foreword to Ray's autobiography Who Killed Martin Luther King Jr.? and in it, he wrote "I have always believed that the government was part of a conspiracy, either directly or indirectly, to assassinate Dr. Martin Luther King Jr."[30]

On Oct. 16, 2011, a memorial to the Rev. Dr. Martin Luther King Jr. — the first honoring an African-American in the area of the Mall — was dedicated in Washington. The memorial — a four-acre tract along the Tidal Basin that is dotted with elms and cherry trees and anchored by an imposing granite statue of Dr. King — is the product of more than two decades of work. It was conceived in 1983 by members of Dr. King's fraternity, Alpha Phi Alpha, and authorized by Congress in 1996.

The monument to Dr. Martin Luther King Jr. is not only the first to a black man on the Mall and its adjoining parks, but also the first to honor a person who was not a president. His stone figure faces the Jefferson Memorial across the water. Lincoln is at his back, and Roosevelt to his right. [2]

The monument was built in China. The inaccurate inscription on the monument attributed to MLK Jr. was removed in August 2013. In addition, MLK Jr's likeness, one of folded arms in resistance, does not accurately portray the man.