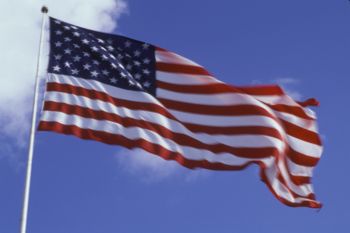 The flag of the United States, a nation founded upon principles of personal freedom, has become a symbol of freedom and liberty in a wider sense, despite efforts with mixed results from both conservatives and liberals to hinder the freedom of American citizens.

Freedom is the state of being free or at liberty rather than in confinement or slavery or under physical, mental or spiritual restraint. More specifically, it can mean:

The desire for freedom was one of the founding principles of the United States of America thanks to the values of the Founding Fathers. Today, freedom still stands proudly at the top of a list of aspirations for Americans. All Americans, no matter their creed or the color of their skin agrees that: "we shall have an association in which the free development of each is the condition for the free development of all".

John Hanneman wrote, "Inner freedom has to do with the very essence of our being." This "inner freedom" is the theme of St Paul's letter to the Galatians.

The Greek words for freedom appear 36 times in the New Testament. Paul uses them 28 times in his letters, and 10 times in Galatians alone. The purpose of this letter is clear: to explain how Christians have been released from the law and been given freedom in Christ, how the Spirit has replaced the Torah in our lives.

Galatians reveals why people struggle so much with law. It identifies the key ingredient to becoming free, and how people can enjoy freedom in Christ. Paul writes:

It is for freedom that Christ has set us free. Galatians 5:1 (NIV)

In his word of greeting in the introduction, he says:

Grace to you and peace from God our Father, and the Lord Jesus Christ, who gave Himself for our sins, that He might deliver us out of this present evil age, according to the will of God the Father. Galatians 1:3-4 (NASB)

Here the apostle defines what he means by freedom. Following his wish for "grace and peace," he uses two phrases that capture for Christians the two ways they are free as a result of their relationship with God.

The first phrase is that the Lord Jesus Christ "gave Himself for our sins." Here the Apostle is describing our freedom from slavery to the power of sin. This is the great doctrine of Justification. We are born into sin, separated from God, but this separation can be overcome because God sent His Son Jesus to die on the cross for our sins. Through this atonement, all of our sins, past, present, and future, have been paid for - all we need do is put our faith in Christ. John Stott comments: "The death of Jesus Christ was primarily neither a display of love, nor an example of heroism, but a sacrifice for sin."[1][2]

In several cases, the left has often co-opted the term "freedom" when in reality they mean socialism, communism, and anarchism. This sort of misdefining of freedom has its roots with the French Revolution with its slogan of "Liberte, Egalite, Fraternite" as well as their concept of "total liberty" being closer in definition to "total anarchy".[3] Likewise, because they falsely conflate conservativism and the right as being "fascist" despite fascism being closer to the far left, they create a false dichotomy regarding what they defined as freedom and fascism, and often imply that freedom is often "given up" for what they defined as fascism. A notable example of this is George Lucas with the Star Wars saga,[4][5] who among other things falsely claimed, owing to his anti-war politics, that going to war at all results in a loss of freedom (despite America literally being founded in the American War for Independence among others).[6]