Nation of Islam members in their trademark bow ties and suits.

The Nation of Islam (NOI) is a political and religious group with a racist, black and Muslim supremacist ideology. The group was founded in Detroit, Michigan by Wallace D. Fard (a/k/a Wallace Fard Muhammad) in July 1930. It is active primarily in America.

Despite its name, the NOI is not considered Islamic by the overwhelming majority of Muslims, based on three key tenets of the NOI which differ from traditional Islamic teaching:

Nourished by the Negro's frustration over the continued existence of racial discrimination, this movement is made up of people who have lost faith in America, who have absolutely repudiated Christianity, and who have concluded that the white man is an incorrigible "devil." [2] 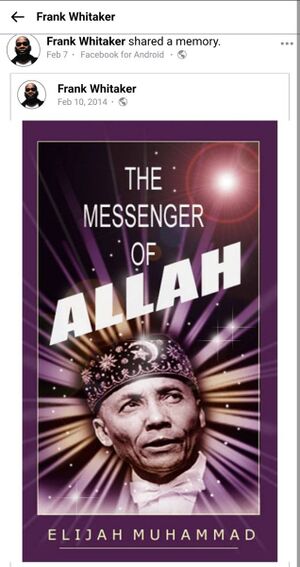 Frank James, the 'suspect' in the Apr 12, 2022 NY Subway mass shooting, where 10 people were shot and at least 23 were hurt in the chaos,[1] AKA Frank Whitaker,[2] is a fan of black nationalism, including Nation of Islam's founder Elijah Muhammad.[3] He left a long trail of hate at several groups of people.[4] He had also posted racist rants against Whites, Hispanics, Asians.[5]