Rosa Louise McCauley Parks (February 4, 1913 – October 24, 2005) was a black civil rights activist. She is most famous for her arrest for refusing to give up her seat on a public bus for a white passenger in Montgomery, Alabama on December 1, 1955. (At the time, white passengers were given priority seating.) For refusing to give up her seat, Parks was convicted of disorderly conduct and fined $14.[1] This arrest led to a boycott of the Montgomery public bus system that lasted over a year, and culminated in the reversal of the seating policy. The incident is considered to be a landmark event in the Civil Rights Movement.

The bus incident was not Parks' first foray into civil rights activism. Prior to this, she had served as a secretary for the NAACP, and she recounted in an interview that she had experienced past confrontations with bus drivers.[2] 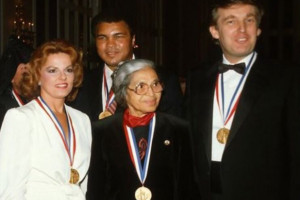 Rosa Parks childhood in Montgomery helped her to develop strong roots in the African Methodist Episcopal Church. Rosa did not attend a public school until the age of eleven. Before that, she was homeschooled by her mother. At age eleven she attended the Industrial School for Girls in Montgomery, where she took various vocational and academic courses. She began laboratory school for her secondary education, but never completed it because she was forced to drop out to care for her ailing grandmother.

Rosa's childhood was greatly influenced by the Jim Crow laws of the South, which segregated white people from black people in almost every part of their daily lives. This included public restrooms, drinking fountains, education and transportation. For the children attending school, there was busing for the white children to their school, but the black children were required to walk to another school. Public transportation followed this line of segregation except that blacks were allowed on the bus as long as they sat in the back, apart from the whites.

The Jim Crow Laws that segregated blacks from whites were created by white members of the Democratic Party in the Southern states between 1876 and 1963. They created many barriers for black voters and had several regulations including banning interracial marriage and providing racially segregated school systems. This continued existence of this policy created and continued great political tension between the Northern and Southern states, the Democratic and Republican Parties, on the issues of black rights.

In 1998, President Clinton awarded Parks the Congressional Gold Medal, which is the highest honor that can be given to an American civilian.[3]

Parks was a devout Christian who credited her faith in God with giving her the strength to resist the law that would have required her to give up her bus seat.[4]