Bayard Rustin (March 17, 1912 – August 24, 1987) was a lifelong socialist, one-time Communist, homosexual activist, and personal secretary to the Reverend Dr. Martin Luther King, Jr. He was instrumental in the United States' civil rights movement of the 1950s and '60s, and organized the 1964 "March on Washington."

Born into a Quaker family, Rustin had a comfortable childhood in West Chester, Pennsylvania. In the 1930s he dropped out of West Chester State College, moving to Harlem, where he sang in local clubs with African American folk artists Huddie Ledbetter and Josh White,[1] a loyal Stalinist.[2]

He studied at the City College of New York, which in the 1930s produced a large number of famous socialists, Trotskyites, fellow-travelers, Stalinists, and even some Soviet agents, including Julius Rosenberg.

In 1936, Rustin joined the Young Communist League, the youth wing of the Communist Party USA. “They seemed the only people who had civil-rights at heart,” he later explained. “The Party played a very active role in most civil-rights cases, like the Scottsboro case.”[4] Despite his claim that he was attracted to the Communists by their concern for civil rights, Rustin remained a party member throughout Stalin's bloody purges.

Despite his vaunted reputation as a Quaker pacifist, Rustin worked as a youth organizer for the CPUSA throughout the Nazi-Soviet pact and Hitler and Stalin's ensuing bloody joint invasion and division of Poland, the Baltic states, Finland and the Balkans. He didn't quit the party until 1941, when Nazi Germany invaded the Soviet Union, causing the party line to reverse, switching from attacking the US as racist to attacking African-American protestors as subverting the war effort.[5] As NAACP leader Roy Wilkins would recount in 1949: 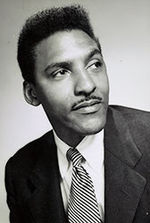 On October 25, 1946, Rustin was arrested in Harlem for commission of a lewd act. He was again arrested on January 21, 1953, in Pasadena, California, on a charge of sex perversion. He pleaded guilty to propositioning two males to engage in sodomy and admitted he had previously been arrested on the same charge in New York City. He was sentenced to 60 days.[7]

In 1955, Rustin became personal secretary to the Reverend Dr. Martin Luther King, Jr. The following year. he introduced King to underground Communist Stanley Levison, who would become King's "most influential white counselor."[8] Levison was a contact of high-ranking KGB agent Victor Lessiovsky, who was in New York under cover as personal assistant to United Nations General Secretary U Thant.[9] Lessiovsky specialized in recruiting "Third World" peoples as Soviet assets.[10] In 1957, Rustin renewed his relationship with the Communist Party, when he attended the CPUSA's 16th National Party Congress by invitation.[11]

During the 1960s Rustin was a member[12] of the League for Industrial Democracy.[13] He would remain a member for years, and became vice president during the 1980s.[14]

Rustin and Tom Kahn were important organizers for the 1963 March on Washington.[15]

A secret Federal Bureau of Investigation memorandum reported that "reliable information" (FBI code for electronic surveillance) revealed that CPUSA National Secretary Benjamin Davis informed a meeting of the CPUSA National Committee in 1965 that he was maintaining liaison with Rustin.[16]