Kyoto is a city in the island of Honshu, in Japan. Kyoto served as Japan's imperial capital for more than a thousand years (794-1868) and in the 21st century is still one of Japan's leading cultural centers.

Kyoto was the city in which the Kyoto Protocol of 1989 was drafted.

Located in the central part of Honshu island and today the capital of Kyoto prefecture, the city served for many centuries as the center of Japanese civilization, a role now held by Tokyo. Kyoto, with a population of 1,386,000, still plays an important role in the nation's cultural and educational life.

The city is well known for its handicraft industries that once catered to the upscale tastes of the imperial court. These include the weaving and dyeing of fine silks and the making of embroidery, ceramics, lacquer and cloisonné ware, and damascene work. Kyoto has long promoted traditional Japanese arts such as Noh drama, flower arrangement, and the tea ceremony. Japan's emperors are still enthroned in the former imperial palace, which is set in spacious grounds in the center of the city. 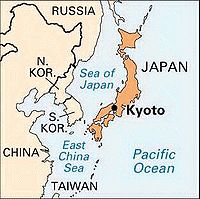 There are over 20 universities and colleges. Kyoto University, founded 1897, has become one of Japan's leading universities; Ritsumeikan University was founded in 1900. Doshisha University was founded as a Christian college in 1875 by Niijima Jo, who was educated in New England and grafted Christianity onto traditional samurai morality. Niijima taught the superiority of the West and shaped the distinctiveness of the school by stressing the necessity of replacing the old morality with Christianity. By 1900, however, Doshisha no longer played a different role from other institutes of higher learning.[1] The Kokuga Society, 1918-1928, was formed by artists Tsuchida Bakusen (1887-1936), Ono Chikkyô (1889-1979), Sakakibara Shihô (1887-1971), Murakami Kagaku (1888-1939) and Nonagase Banka (1889-1964). The goal was to foster reform of traditional painting by showcasing art that celebrated creativity, individuality, and self-expression, in order to encourage an alternative aesthetic to that associated with the Bunten, the dominant, government-organized exhibition series.[2]

Emperor Kammu selected the site for his capital in 794 AD. The new city was laid out as a checkerboard, with north-south and east-west axes. The imperial palace was built at the northern end of the central axis. It was modelled after Ch'ang-an, the capital of the T'ang dynasty in China, which was well known to Japanese diplomats. Kyoto gradually expanded east across and beyond the Kamo River (which now flows through its center) to the foot of the eastern hills. Emperor Kammu named the city "Heian-kyo," ("Capital of Peace and Tranquility"); people called it simply Miyako or Kyoto, both meaning "capital."

The imperial coourt remained in Kyoto until 1869. Its heyday was the era of the cultivated, aesthetic Heian court, which was at its height in the 11th century. From 1192 to 1333 Japan was controlled by shoguns, or hereditary military dictators, who ruled from Kamakura in the east. The shogun then moved to Kyoto, while the powerless emperor also was in residence. Kyoto was badly samaged in multiple civil wars of "era of warring states" (1467-1590), notably by the Onin War of 1467-1477, so that by 1500 the authority of both court and shogunate was at a low ebb. People attached to the residences of the court aristocracy or formerly employed by shrines or Buddhist temples, craftsmen, and ordinary commoners joined together in social organizations and created for themselves places to trade and work in specific urban areas. In these districts social, professional, and structural urban elements merged. The "tsuchi ikki" was a 1428 revolt in the Kyoto area against landlords by peasants demanding, among other things, an annulment of debts and possession of common land for villages.

After 1560 a series of powerful shoguns revitalized the shogunate and the city, notably Oda Nobunaga, Toyotomi Hideyoshi, and Tokugawa Ieyasu. They reunified Japan, and restored their capital to its former glory. They and members of the Imperial court erected many strikingly beautiful buildings, including Nijo Castle; the Katsura Imperial Villa and its famed landscape gardens; Golden Pavilion (reconstructed in 1955 after a fire); the Silver Pavilion (1479), with its sand garden; the stone garden of Ryoanji temple; Daitokuji temple, with priceless paintings; Chion-in temple with its massive two-storied gate and huge bell; and Kiyomizudera temple, clinging to the edge of a cliff.

After 1603 the shogunate, and with it the center of political power, shifted once more to the east, to Edo; the imperial court remained in Kyoto as a ceneter of ceremony. In 1868 the capital of Japan was officially transferred to Edo, renamed Tokyo, or "Eastern Capital."

After the Meiji Restoration, Kyoto Prefecture established relief institutions in the city of Kyoto to help preserve public order, funding them by levying a tax on tea houses and entertainers. It established primary schools in each district group (Cho-gumi).

The "Kyoto School" a movement in political philosophy was developed 1913-45 by Nishida Kitaro (1870-1945) of Kyoto University and Tanabe Hajime (1885-1962). It called for Japanese econoic, political and spiritual supremacy in Asia.[3]

Kyoto was the only major Japanese city not bombed in World War II; it was put off-limits by Secretary of War Henry Stimson, who appreciated its cultural importance.

The controversial Kyoto Protocol of the UN Framework Convention on Climate Change (1997) called for long-term reduction in carbon emissions by the industrial countries. It was rejected by the U.S. and did not include China or India. A purification ceremony with period costumes at the Jonengu shrine.