Osaka is an important Japanese city and port, located in the main island of Honshū. It is part of the Osaka - Kobe - Kyoto metropolitan area. Osaka has a population of 2.5 million. Osaka was Japan's main city before the rise of Tokyo in the late 19th century. It remains the second-largest city in Japan, with longstanding rivalries with Tokyo.

The famous Osaka Castle, started in 1583, has a museum that documents Toyotomi Hideyoshi's life and the history of the castle.

Osaka Imperial University was inaugurated as the sixth imperial university in Japan in 1931.

Several major companies are based in Osaka like Mitsubishi, Sanyo, Suntory and Sumitomo Group.

Domyoji, in the suburbs of Osaka, was one of the longest-lived temples in Japan. It was founded as one of the earliest Buddhist monasteries in Japan, then known as Hajidera; the original buildings were all destroyed by fire during the civil wars of the late 16th century. As the aristocratic family Buddhist temple expanded its function to incorporate popular religion and Shinto deities, its religious history became formidably complex.[1]

After the wars of Osaka, 1614 and 1615, Matsudaira Tadaaki (1583-1644) entered Osaka and was assigned by the shogun to provide military support to the shogun's provincial magistrates stationed in nearby provinces such as Settsu, Kawachi, and Izumi. As the military tension of the area was relaxed, Matsudaira was sent to the nearby province of Yamatokoriyama, and the shogunate started its direct control over Osaka. The Osaka city commissioners controlled their political and economic domain, and the system of Osakajoban (the military guard of Osaka castle assigned by the shogun to the selected daimyo) was established as its military support. 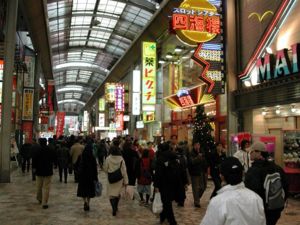 Osaka was a market town that became a castle town during the late sixteenth century, first under Hideyoshi and, subsequently, under Tokugawa hegemony, thereby becoming a key nodal point in Japan's administrative network. Because of its political role and especially its strategic geographical location at the confluence of the Kinai's great transport artery, the Yodo River, and the sheltered Inland Sea, Osaka evolved into Japan's merchant capital. Because a wealthy merchant community flourished there, the city nurtured a culture reflecting Osaka's entrepreneurial spirit; this mixture of commerce and culture made Osaka distinct from Japan's other two great metropolitan centres, Edo (Tokyo) and Kyoto (the imperial capital). Thus Osaka served for centuries Japan's great commercial center; in 1615, at the start of the Tokugawa Shogunate, when Edo was still mostly a fishing village, Osaka was the largest city in Japan.[2]

Wholesale merchandizing and credit techniques were developed. Commerce was carried on by families. Edo (Tokyo), by contrast, was a more city of consumers. Merchants and artisans dominated Osaka, a prominent commercial city in this military bureaucratic society. Large-scale industrial production improved the condition of its townsmen and farmers. While the samurai monopolized political power, Osaka townsmen dominated economic and social power. Friction occurred between shogun administrators and Osaka's merchant community over directives ordering merchants to buy governmental rice. Compulsory rice purchases at inflated prices acted like a tax imposed upon the merchants. The merchant community organized against such policies.

Osaka natives were stereotyped in Edo literature from at least the 18th century. Jippenisha Ikku in 1802 depicted Osakans as stingy almost beyond belief. In 1809 the derogatory term "Kamigata zeeroku" was used by Edo residents to characterize inhabitants of the Osaka region in terms of calculation, shrewdness, lack of civic spirit, and the vulgarity of Osaka dialect. While Edo residents aspired to samurai culture, and depicted themselves as poor but generous, chaste, and public spirited, they saw "zeeroku" as obsequious apprentices, stingy, greedy, gluttonous, and lewd. Osaka residents are stigmatized in much the same way down to the present, especially in terms of gluttony and extravagant spending on food: a famous Japanese saying goes Oosaka wa kuidaore (大阪は食い倒れ 'Osaka people eat themselves into ruin'). By contrast, Tokyoites are stereotyped as spending too much money on footwear, and Kyoto people on fine clothes.[3]

As the industrial city most clearly defined in the development of capitalism in Japan, Osaka had a concentration of slums, unemployment, and poverty. It was Osaka's municipal government which first introduced a comprehensive system of poor relief. Although it is evident that there was some British influence on the system that was established, policymakers in the local government emphasized the importance of family formation and mutual assistance as means of combating poverty. One consequence of such attitudes was that the cost to the local authorities of the relief of poverty was minimized.[4] Seki Hajime (1873-1935) carried the message of social reform from the factory to the city. An ardent advocate of industrial policy at the turn of the century, he set his sights on "worker protection" in the early 1910s, before turning to urban reform at the end of the decade.[5]

In the 1910s and 1920s, the Osaka Boy Scouts were established from an American Young Men's Christian Association (YMCA), which had close contacts with the Boy Scouts of America (BSA). The acceptance and subsequent popularity of the Boy Scouts reflected widespread Americanization of Japanese city life, although the Japanese domesticated American Boy Scouting and tried to remake it as a Japanese entity. The Boy Scouts was a part of the Progressive movement that represented various efforts responding to social problems in both Japan and the United States. It was actually included in transpacific Progressivism. In the 1930s the voluntary Boy Scout organization was forced to transform itself into a militaristic association, starting with an incident at the Osaka Boy Scouts. Exchanges with the BSA eventually stopped, yet transpacific Japanese interest in the BSA continued. Observing the US treatment of minorities in a 'domestically colonial situation,' especially African Americans, the Boy Scouts came to be utilized as a cultural agent for supporting the Japanese empire in Eastern Asia and the South Sea Islands. In this sense, the Boy Scouts was a transpacific social movement.[6]

Osaka was largely destroyed by American bombing raids in 1944-45, as most of the people fled to the countryside. Fifty raids between 19 December 1944 and 14 August 1945 killed about 15,000 people and destroyed thousands of neighborhood factories and 340,000 houses. For example, on 15 June 1945, the city was hit by more than 100 B-29s, with many killed and more than 53,000 houses destroyed or damaged. Air raid shelters were few, and warning sirens came late. About 1.2 million people left Osaka. One young eyewitness Tezuka Osamu recalled:[7]

'As the air raid warning siren began, as usual, I saw that a formation of U.S. bombers was heading towards us along the Yodogawa River. As soon as I thought "here they come," incendiary bombs were showered down on us, making a loud noise like heavy rain. Bombs streamed down one after another on the factory. When I thought that this was the end of my life, exposed on the top of the watchtower, a bomb directly hit the roof just two meters below me. Later I heard that this bomb killed all the people who had rushed into the air raid shelter under the building. I tumbled down the watchtower, screaming as if I had gone mad. All around me, the ground was a sea of fire ... and houses in every direction were burning with leaping flames and rumbling sound. Then rain with black soot came down. I walked to the top of the river bank of the Yodogawa. From there, I saw many big craters hollowed by bombing, where numerous objects resembling human bodies were lying on top of one another

The city was rebuilt rapidly after 1945.

The international exposition held in Osaka in 1970 created an architectural spectacle combining several threads of Japanese thought. The design of the eight-hundred-acre space, by Okamoto Taro, Tange Kenzo, and others, was driven by a systems approach, which largely did not need to worry about the ideological and material content of the various pavilions and other spaces within its vast borders. The designers' use of spectacle sought to transform visitors to the site, not through representation but through infrastructure and layout; their guiding principle was the accommodation of possible contingencies.[8]