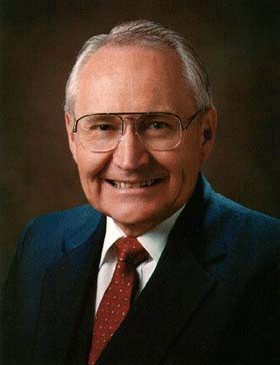 L. Tom Perry (August 5, 1922 - May 30, 2015) is a member of the Quorum of the Twelve Apostles in the Church of Jesus Christ of Latter-day Saints. Perry was born in Logan, Utah. His professional career was spent in the retail business where he served as vice president and treasurer in companies located in Idaho, California, New York, and Massachusetts. Perry was called to his present Church position April 6, 1974, after serving as an Assistant to the Twelve since 1972. Perry died from cancer at age 92.