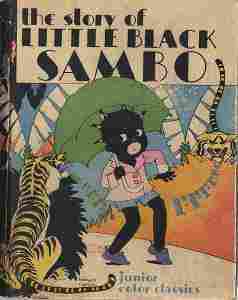 The Story of Little Black Sambo is a short children's book[1] by Helen Bannerman, a Scottish national. Helen Bannerman went on to write many similar books. The book was first published in 1899 and features the hero, Sambo, outwitting four hungry tigers by trading his colorful clothes and umbrella in return for his safety. The tigers then are defeated by their own vanity, as each bites the next one's tail forming a ring. Objections which surfaced in the mid 20th century[2] are primarily to the illustrations and to the protagonist's name, not to the story itself.[3]

The story takes place in a mythical India and the tigers racing around the tree are turned into ghee, the Indian word for clarified butter, used to make pancakes for his family's supper.

Typical reviews suggest that the story well deserves its place in children's literature as a charming story of resourcefulness and bravery:

The story was a children's favorite for many years, but then became subject to a censorship campaign in certain countries based on complaints about outdated racial imagery.[6]

A 1941 book and record version of the story "epitomizes the worst of racial stereotyping -- Sambo's parents are now Mammy and Pappy, for example, and they are caricatures of Aunt Jemima and Steppin' Fetchit." [6]

All American children did not see the same book, however. Though the authorized Stokes edition sold well and never went out of print, a host of other versions quickly began to appear from mass-market publishers, from reprint houses, from small, outlying firms unconstrained by the mutual courtesies of the major publishers. A few are straight knock-offs of the book that Bannerman made, without her name on the title page; the majority were reillustrated -- with gross, degrading caricatures that set Sambo down on the old plantation or, with equal distortiveness, deposited him in Darkest Africa. Libraries stocked the Stokes edition, and a few others selectively. But overall the bootleg Sambos were much cheaper, more widely distributed, and vastly more numerous.[4]

The controversy over the book led to the closing of a chain of over 1,000 Sambo's restaurants. The restaurants had been named after its founders, Sam Battistone and Newell Bohnett, but the association with the story led activists to campaign for a name change, and the chain declared bankruptcy by the end of the 1970s. The flagship location remains in business in Santa Barbara, California.