The liver is an organ of the body, a crucial part of the digestive system which produces bile.

One of the most important functions of the liver is to filter the blood that runs through the body. When harmful substances such as drugs, alcohol, metabolic waste and chemicals are ingested and reach the liver, they are at least partially filtered out before the rest of that material hits the blood stream. Healthy livers can usually filter about 1.5 quarts of blood per minute, or about 540 gallons of blood per day.

The liver is also a vital component of the digestive system. After you eat a meal, the liver is stimulated to produce a special digestive enzyme called bile. Bile is created in the liver and then stored in the gallbladder. Once the food reaches the intestines the gall bladder releases the bile into the duodenum, aiding in digestion. The bile is used to break down the complex fat in the diet. The liver is one of the main storage areas in the body for vitamins, energy, and minerals (especially iron). The liver is able to store these products and then release them into the bloodstream as they are needed.

This liver is largely involved in the metabolism of carbohydrates, lipids, and proteins. With carbohydrates the liver creates glucose from amino acids and breaks down glycogen into glucose. With lipids the liver synthesizes cholesterol and produces triglycerides. With proteins, the liver converts lactic acid to alanine.

The liver is involved in creating blood clotting substances, such as fibrinogen and prothrombin, converting ammonia to urea and also helps with the immune system by storing active immunologic cells.

It is only internal organ which can fully regenerate its own tissue.

The liver can be damaged by excessive alcohol consumption, drug abuse or, in severe cases, an extremely poor diet. However, because liver tissue can regenerate, liver damage can be reversed if consumption of alcohol, drugs, or unhealthy foods ceases.

The liver is unable to always completely filter out these substances. This especially true in the case of alcohol, because it is consumed faster than the liver can filter the blood.

The liver plays a central and crucial role in the regulation of carbohydrate metabolism. Its normal functioning is essential for the maintenance of blood glucose levels and of a continued supply to organs that require a glucose energy source. [1] 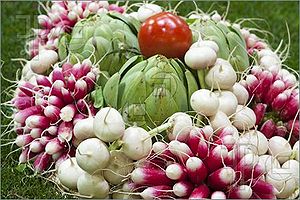 Grapes activate liver to glycogenic functions and bile secretions and is highly useful for all types of liver disorders. Grapes are one of the most valuable fruit that is known to revitalize our entire system. [2]

There are foods that would also be especially helpful in supporting your liver's ability to detoxify chemicals like: lemon, onions, garlic, radish, artichoke and egg yolks. (We'd caution against overconsumption of egg yolks, however, due to their higher concentration of cholesterol and saturated fat. Two-to-four eggs per week would be a very reasonable amount for most persons); also broccoli, cabbage, cauliflower, collard greens, kale, and Brussels sprouts. [3]

Animals' and birds' livers are often eaten as food, including lamb, chicken, duck and goose liver. Liver pâté, such as foie gras is considered a delicacy, although there are concerns over the treatment of the ducks or geese involved, since this pâté can only be produced by chronically overfeeding them to engorge the liver.