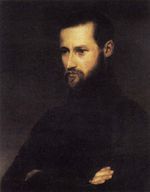 Louis Auguste Blanqui (1805 – 1881) was a French radical revolutionary socialist. He was involved in multiple armed insurrections, including the French Revolution of 1848, and was jailed after their suppression. Blanqui had been sentenced to prison more than nine times between 1831 and 1872 and spent there more than 33 years of his entire life.

Blanqui developed the term No gods, no masters

The advent of Socialism

While being in prison, Blanqui developed his own socialistic theory circled around the idea of dictatorship of the proletariat. His main idea was that there could be no Socialist transformation of society without a temporary dictatorship that would first disarm the bourgeois guards, confiscate the property of the church and of the bourgeoisie. In his words, "Arms and organization, these are the decisive elements of progress, the serious method for putting an end to poverty. Who has iron, has bread. ... France bristling with workers in arms means the advent of socialism."[1]


Blanqui also wrote an address to the committee of social democrats in London, the text was later noted and introduced by Karl Marx.[2]

While facing mostly only a caricature of Christianity represented by French rulers of his day, Blanqui became ardent anti-Christian who tried to deceive the public about the nature of Christianity by calling it a "terrible disease", that in his mistaken view "for nearly two thousand years kept humanity nailed to a bed of sorrows."[3] By doing so he exhibited the traits of disturbed character such as Selective attention.

Blanqui's phrase ‘Who has iron, has bread’ translated into Italian as “Chi ha del ferro ha del pane” was at the front page of the Italian fascist newspaper Il Popolo d'Italia where Benito Mussolini was editor.[7]