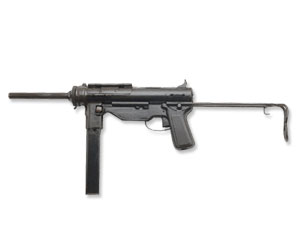 The M3A1 was an American submachine gun that first saw action in the European Theater during World War II. The United States military started to believe in the value of submachine guns after a successful British Sten Mark series and the famous German MP40 Submachine gun. Unfortunately, the M3A1 was not met with much fanfare.

The shortcomings of this simply produced submachine gun became apparent in battle field conditions.[1] Many soldiers were in favor of using the M1 Thompson "Tommy Gun", or even a German MP38 or MP40 if they found one. Even the .30 caliber M-1 Carbine was more appealing for many soldiers. Nevertheless, the M3 Grease Gun was pressed into service and was used by many soldiers throughout the war.

In 1944 the Grease Gun was produced in an even simpler and effective way. It jammed less but was still not the most appealing weapon, with many reports of accidental discharges. The U.S. soldiers never fully accepted the Grease Gun even though 700,000 were made in the United States alone.