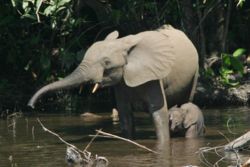 The Manovo-Gounda St. Floris National Park occupies most of the eastern end of the Bamingui-Bangoran province in the north of the Central African Republic, on the international border with Chad. The park, measuring 6718 square miles, is large enough to include the entire basins of three rivers, grassy floodplains, savannah and woodlands, as well as the wetlands associated with the rivers, and the sandstone Massif des Bongo.[1]

The massif rises from the plain in a 100-200m escarpment, and five major rivers (the Vakaga, the Goro, Gounda, Koumbala, and the Manovo) flow through the park from the massif to the Bahr Aouk - Bahr Kameur floodplain in the north. The basins of the Goro, Gounda and Koumbala all lie within the park, but their flow is intermittent near the end of the dry season, and they may only reach the Bahr Aouk and Bahr Kameur during the wettest months between June and November.[2]

The park is the largest savannah park in west and central Africa and presents a broad range of habitat types ranging from riverside swamps through seasonally flooded flat river valleys where the trees and shrubs are confined to patches of higher ground and have to be both flood and fire resistant, to dense dry forest. The savannahs are heavily used by wildlife, especially ungulate herds. The lusher forests in deep high-banked valleys are home to many species of monkey and birds. The rocky areas are used by baboons, and the bamboo groves by shyer ungulates.

There are 57 known species of mammal in the park, including several threatened species such as the black rhinoceros and the African forest elephant. Illegal poaching of rhinoceros and elephant has been heavy, and has also seriously reduced the numbers of leopards, crocodiles, lions and hyaenas. Around 320 species of birds have been identified, including the African fish eagle, marabou stork and pelicans. On the plains, ostrich are common, moving to woodland to lay their eggs. Several species of bee-eater and kingfisher are present along the rivers.[3]

As an "outstanding example representing significant on-going ecological and biological processes in the evolution and development of terrestrial ecosystems and communities of plants and animals..., [containing] the most important and significant natural habitats for in-situ conservation of biological diversity, including threatened species of outstanding universal value from the point of view of science or conservation", UNESCO inscribed the park as a World Heritage Site in 1988.[4]

"The professional poaching of large mammals, particularly rhinoceros and elephant, is facilitated by a main national route which crosses the park. Some poachers come from within the country but most are from Chad and Sudan, well supplied with automatic weapons since the civil wars in those countries. In 1997 uncontrolled poaching reached emergency levels, with heavily armed groups entering the park, setting up camp, and transporting bushmeat out by camel train. Four park staff were killed, and there was no effective anti-poaching force. In 1998, UNESCO stated that 80% of the park's wildlife had been harvested by poachers. The elephant population decreased by 75% between 1981 and 1984, and as few as ten black rhinoceros remained by 1988.

Two other factors cause concern: fire, whether initiated by grazers, poachers, hunters or guards, and grazing. Most illegal grazing occurs during the dry season, with huge numbers of cattle moving from the Nyala region of Sudan and from Chad which compete with the wildlife and can introduce disease. This is also affecting the composition of grasslands, with perennial species giving way under grazing pressure to annuals and herbs."[5][6] The site was added to the List of World Heritage in Danger in 1997.