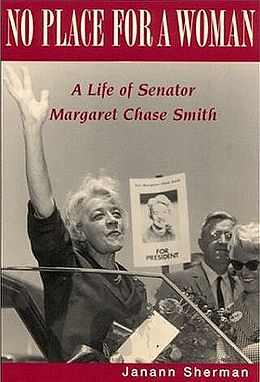 Smith was a liberal Northeastern Republican (or "Rockefeller Republican) and was defeated for reelection in 1972 by William Hathaway, a Democrat who was even more liberal, who attacked her for supporting the Vietnam War. She was notably honest, independent and courageous. Her concern for national defense during the Cold War led to service on the House Naval Affairs Committee and later several subcommittees of the Senate Armed Services Committee.

Smith led the fight for granting women regular status in the armed services during 1944-48. After passage by the Senate in 1947, a bill providing for regular status for women encountered opposition in the House of Representatives Armed Services Committee from several members who would agree only to reserve status for women. Through adroit political maneuvering, Smith forced the issue to the floor, thereby demonstrating that regular status had strong support in the House and ultimately insuring the passage of the Women's Armed Services Integration Act of 1948.[1]

Smith was a longtime supporter of the Equal Rights Amendment and the leading advocate for women's presence in the military. In her 1948 campaign, she released a statement that said she was "a champion for the women" but "no feminist" because "a woman's viewpoint should be...free of any emphasis on feminine interest."

She was a nominal candidate for president in 1964. She did respectably well, considering her lack of organization, time, and money. As a speaker she was pleasant and smiling; reasoned in her answers and without invective, she campaigned on the issues.

She is remembered for her famous Declaration of Conscience in the 1950 in which she said: