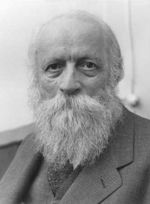 Martin Buber (Vienna 1878 – Jerusalem 1965) was an Austrian-Jewish philosopher, theologian, essayist, translator and editor. His work was mainly dedicated to the philosophical dialogic principle, the revival of religious consciousness among the Jews and the Zionist movement. He also wrote tales and legends.

A selection of Buber's works, edited by him in his eighties, comprises more than four thousand pages and is divided into writings on philosophy, the Bible, Hasidism, and Judaism. [1]

He wrote that Jews and Arabs must develop the land together without one imposing his will on the other. We considered it a fundamental point that in this case two vital claims are opposed to each other, two claims of a different origin, which cannot be pitted one against the other and between which no objective decision can be made as to which is just and which is unjust.
We considered and still consider it our duty to understand and to honor the claim which is opposed to ours and to endeavor to reconcile both claims. We have been and still are convinced that it must be possible to find some form of agreement between this claim and the other; for we love this land and believe in it future; and seeing that such love and faith are surely present also on the other side, a union in the common service of the land must be within the range of the possible. Ibidem