From Conservapedia
(Redirected from Arabs)
Jump to: navigation, search 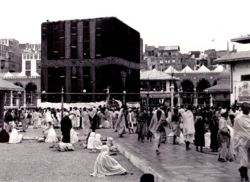 In modern terms, an Arab is anyone who (1) is of ethnic Arab descent and (2) has facility in the Arabic language. Historically, the term was narrower, referring to only those from Arabia. Westerners tend to regard all Arabs as Muslims, but this is incorrect, as some Arabs are Christian or of other faiths: actor Danny Thomas was a Christian Arab. Virtually all of the Jewish Arabs were expelled from the various Arab countries in 1948 despite having lived there since the time of King Solomon.

The Modern Arabic language is a member of the Arabian Semitic stock (which includes Hebrew) of the Afro-Asiatic family of languages, and with the Berberic languages, display remarkable structural similarities.

Arab Americans are Americans of Arab ancestry. Over 4 million Americans trace their ancestry to Arab countries, and the vast majority are citizens of the United States. Over 75% are Christians, many having escaped religious persecution in their homelands. Today, one-third of Arab-Americans live in California, New York, or Michigan. They are better-educated than the average American. The average Arab-American entrepreneur may have a higher personal and household income than a non-Arab-American counterpart in most regions of the United States. The overall U.S. population grew by 13% in the 1990s, while the Arab-American increased by 38%. A majority of Arab-Americans, around 62%, originate from Lebanon, Syria, Palestine and Jordan.