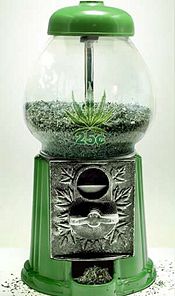 Marijuana vending machines have been likened to gumball machines and other candy dispensors, with an emphasis on easy, recreational use instead of responsible medical use.

Some studies claim that Cannabidiol, a chemical compound found in marijuana, inhibits cancer cell growth in lab animals.[36] Recent studies have claimed cannabidiol to be as effective as atypical antipsychotics in treating schizophrenia.,[37] and marijuana is commonly viewed as a natural alternative to any otherwise synthetic pharmaceutical drugs. It has also been claimed to increase brain cell growth [38] and increase appetite, which its proponents claim can be useful for patients undergoing chemotherapy. Marijuana has been used to treat anorexia and has been used as an antiemetic.[39] Harvard University conducted a study on the effect of Δ-9-Tetrahydrocannabinol on certain lung cancers. The result of the test was that THC can reduce tumor size by as much as half.[40] In addition to a significant reduction in tumor size, there was a reduction in lesions on the lungs by 60%, and a reduction in protein markers associated with the progression of cancer.[41] This study claims that not only can THC treat the side effects of cancer treatment, but can stop the spread of cancer, repair damage caused by tumors, and even reduce the size of tumors.

In addition to the claimed positive effect on cancer treatment symptoms and cancer itself, marijuana is used to help patients afflicted with ALS.[42]

Critics, however, doubt that there are any beneficial medicinal effects of marijuana that cannot be duplicated by other, less-addictive drugs. They also charge that efforts to legalize "medical" marijuana are merely a pretext for general decriminalization of a common "gateway drug" for recreational use.

Several states have legalized "medical" marijuana. Under the Bush administration, the federal government ignored such state laws, viewing them as unconstitutional interference with federal law. California's law was overturned by the Supreme Court in the case Gonzales v. Raich,[47] which said that Congress can "regulate purely local activities that are part of an economic 'class of activities' that have a substantial effect on interstate commerce." This decision has been criticized by numerous conservatives and libertarians as an unwarranted expansion of Federal power. Also, Barack Obama has directed Federal prosecutors to avoid prosecuting activities legal under such state laws.[48]

California currently allows patients to grow marijuana themselves for alleged "medical" purposes, or to organize as "cooperatives." Until recently, however, anyone could supply anyone with "medical" marijuana as long as the buyer had a doctor's note (which virtually anyone could obtain) and the person designated the supplier as his "primary caregiver".[49] Many people have used this as an excuse to use marijuana recreationally. "Medical" marijuana was even available from vending machines,[50][51] similar to automated prescription dispensers at some pharmacies.[52] Both the Drug Enformement Agency and the California Supreme Court say that such practices are illegal. One attorney has said that he considers all sale of marijuana still illegal. Additionally, the seriousness of having a marijuana vending machine for supposedly "medical" reasons is off-set by the presence of a Bob Marley poster in at least one location. Marley was a member of the Rastafari cult, which advocates the recreational use of the drug under the guise of "spiritual" reasons.