From Conservapedia
(Redirected from Merry Christmas)
Jump to: navigation, search 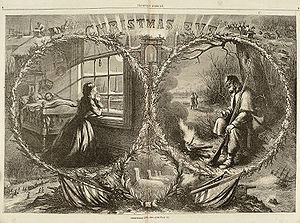 The Bible does not give a date for the birth of Jesus. The holiday is exactly nine months following Annunciation on March 25. On the Roman calendar, March 25 was marked as the spring equinox while December 25 was considered the date of the winter solstice. Christmas is often connected to pagan festivals such as Yule, especially by those who oppose Christian traditions. However, the symbolism of a solstice date appealed to the Church Fathers for reasons unrelated to the various pagan festivals that were celebrated at this time of year.

In Western countries, during the Advent of Christmas season, and before the arrival of Christmas Day, people in anticipatory celebration generally hang up colored lights, place a Christmas tree (typically an evergreen conifer tree) in their house, sing carols, and exchange gifts. Gift-giving commemorates the gifts given to the Christ child by the magi and is symbolic of the fact that Jesus came as gift to mankind from God. Most towns and cities do this on an elaborate scale in public places, putting a large tree in the public square, and hanging large arrangements of lights with Christmas themed designs over the streets weeks before Christmas Day, removing the tree within a few days or the week following Christmas Day and safely discarding it, often leaving the other forms of public decoration and display in place for weeks afterward, even to the end of January.

On the Roman calendar, December 25 was the date of the winter solstice, called bruma in Latin.[2] The Julian Calendar was designed by Sosigenes of Alexandria and introduced to Rome by Julius Caesar in 45 BC. Sosigenes intended March 25 to be the date of the equinox. The Julian calendar has a leap year, or additional day, every four years, and thus a year of 365.25 days. The astronomical solar year is 365.242 days, so the equinoxes and solstices "drift" by almost a day each century. The Gregorian calendar, instituted in 1582, attempted to reestablish the calendar alignment as it was at the time of the Council of Nicaea in 325. By modern calculations, the equinox is on March 21 or 22 and the solstice is December 21 or 22.