From 1993 through 1996 Vrabel attended Ohio State University and played defensive end for the Ohio State Buckeyes. A two time All American player, Vrabel set school records for total tackles for a loss (66), and sacks (36).[1] He also owns the Ohio State record for the most sacks in a season with thirteen in 1995.

In his freshman, 1993 season, he played in every game as a backup defense end. The following year (sophomore 1994) however, he became the starter defensive end and started and played in every game. As a junior (1995), he was named as a first-team All Big Ten Conference selection and Big Ten Defensive Lineman of Year. He also broke the Buckeyes record for sacks in a season with 13.[2] Finishing up his college career as a senior in 1996, Vrabel once again repeated as Big Ten Defensive Player of the Year and All Big Ten Conference defense end selection. He led the defense (best in Ohio State history) with 9 sacks that year.

Mike Vrabel was drafted by the Pittsburgh Steelers in the third round of the 1997 NFL Draft. In his rookie season he played in 15 games as a backup defensive end and third down pass rusher. His biggest game as a rookie came in the playoffs (1997 AFC Divisional game) when he sacked and forced New England Patriots quarterback Drew Bledsoe to fumble the football with less than two minutes left in the game with the Steelers leading only by one point.

From 1998 through 2000, Vrabel continued play the role of situational pass rusher and special teams player. In his total career with Pittsburgh he had 53 total tackles and seven sacks.

Becoming an unrestricted free agent in 2001, he signed with the New England Patriots. He quickly became an important player in the Patriots defense as he played in all 16 games in 2001 and started 12 of them at outside linebacker. He also started all 3 of the Patriots postseason games that year and made a key play in the Super Bowl XXXVI vs the Saint Louis Rams when he forced Rams quarterback Kurt Warner to throw an interception that was returned by Patriots conerback Ty Law for a touchdown. The following year, 2002, Vrabel played in all 16 games and started 14. In the season, he set then career highs in tackles (82), sacks (4.5) and fumble recovery's (2). On the opening game of the season on the 4th play of the game he intercepted Pittsburgh Steelers quarterback Kordell Stewart... Two weeks later in a game vs the San Diego Chargers he caught a one-yard touchdown pass from Tom Brady in the second quarter... 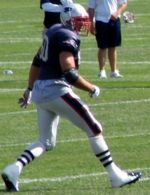 In 2003 and 2004, Vrabel was a major part of the Patriots consecutive Super Bowl Championships victory's. Even though he missed three games in 2003 he still set career highs in sacks with 9.5. Three of those sacks came in a week eight victory over the Cleveland Browns. In December he was named AFC Defensive Player of the Month. In the Patriots 32-29 Super Bowl XXXVIII victory over the Carolina Panthers, a Vrabel sack and forced fumble set up the Patriots to score their first touchdown of the game. In the forth quarter of the game he caught a one-yard touchdown pass from Tom Brady. The touchdown catch made him the first player to make a sack and score on a touchdown reception in Super Bowl history. The 2004 season saw Vrabel start 15 of the 16 regular season games and all 3 of the postseason games at outside linebacker. He had two touchdown receptions in the regular season and added one more in the Patriots Super Bowl XXXIX victory over the Philadelphia Eagles.[4][5] In the 2004 playoffs he had two sacks and two forced fumbles.

In 2005, Vrabel set career highs in tackles with 108 and started all sixteen of the Patriots regular season games. In the second game of the season he intercepted Carolina Panthers quarterback Jake Delhomme and returned the interception for a touchdown - the first defensive score of his NFL career. Five weeks later in a game vs the Buffalo Bills, on ESPN Sunday Night Football, he set a career high for tackles in a game with 15.

Vrabel basically repeated his 2005 production in 2006 as a once again started all sixteen of the Patriots games and was a leading tackler and pass rusher on the team. Due to injures to the Patriots linebackers, he was forced to move from his outside linebacker position to inside linebacker. In his new role where he rushed the quarterback less but dropped back in to coverage more, Vrabel set a career high in interceptions with three.