The Super Bowl — derisively called the "Super Subsidy" because taxpayers foot much of the expense, or the "Super Fleece" because the prices are such a ripoff — is the championship game at the end of each National Football League (NFL) season. The same small group of teams and coaches in the Super Bowl every year, because the process does not really reward the finest athletic achievement. In 2020, Miami taxpayers were required by the NFL to spend a million dollars paying for millionaire players to stay in luxury hotels.

The best football players are rarely showcased on Super Bowl Sunday, in contrast with a generation ago. The Super Bowl also features a half-time show that is increasingly liberal and sometimes even pro-homosexual. The game as become a tool of the liberal media in bullying states, which are scheduled to host the event, into rejecting conservative legislation.

For four straight years continuing through 2015, the number of viewers of the Super Bowl in the key demographic of 18 to 49 years old has declined. The media has been criticized for over-hyping the audience.[1]

The outcome in Super Bowls is increasingly the result of play-calling by non-athletic coaches, who use extensive business-like approaches to the game. Genuine athleticism has become less important to this game, and is even viewed with disdain by some. The NFL is distorted so badly that almost none of its top athletes ever play in the Super Bowl now.

The mayor of Glendale, Arizona, expected his city to lose money from hosting the 2015 Super Bowl: "I totally believe we will lose money on this," mayor Jerry Weiers told ESPN.[2] Despite this, and how independent economists have shown that the benefit to a Super Bowl host city is zero or nearly so, the taxpayer-supported NFL absurdly claims that a city receives benefits of $500 million just for hosting the Super Bowl.

The NFL was so harmful to local businesses and taxpayers of New Jersey in 2014 that 55% of business leaders who were surveyed afterwards said they did not want New Jersey to host the game again.[3] Part of the NFL's bilking of taxpayers was its demand for a $7.5 million rebate on sales taxes.[3]

The first Super Bowl ever played was in 1967 as a championship game between the top teams in the National Football League and the now-defunct American Football League (AFL). The teams that played in the first Super Bowl were the Green Bay Packers from the NFL and the Kansas City Chiefs from the AFL. After the AFL's merger into the NFL in 1969, the Super Bowl became the championship game within the NFL pitting the top teams from the AFC and NFC. The winners of the Super Bowl are awarded the Vince Lombardi Trophy, named for the Packers legendary coach during the 1960's. 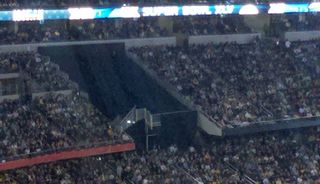 Super Bowls are the most watched television broadcasts in history, but much of the audience simply uses the game as background noise during parties. Super Bowl XLVIII was the highest rated broadcast in history, with an average viewership of 112 million.[4] Viewership has been declining in recent years, as has attendance: the total attendance for Super Bowl LIV--held in the warm weather climate of South Florida--was the second-lowest on record (behind only the first Super Bowl, which at that time was called the "NFL-AFL Championship Game").[5]