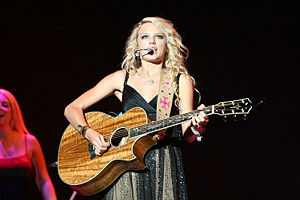 Taylor Swift at a live performance

Taylor Alison Swift (born December 13, 1989) is an American Grammy-nominated pop music singer-songwriter. She has received numerous awards, and one of these was being named Billboard Magazine Artist of the Year for 2009 and received the title Artist of the Year at the Country Music Awards. She has, in the past, been praised by many Conservative parent advocacy groups for being a positive role model for young people. However, due to becoming influenced by Hollywood values, Swift began to sell sex in her lyrics and attire in appearances. She proved to being a liberal in October 2018 when she endorsed Democrats for office in the state of Tennessee.[1]

Swift was born in the town of Wyomissing, Pennsylvania. Her father is Scott Swift, a stock broker, and her mother is Andrea, a homemaker. She was raised in a Christian home and went to a Christian high school. After starting her career, she became homeschooled and obtained her diploma in this fashion.

She released her first album, Taylor Swift in late 2006 which became #1 on the Billboard Top Country Albums and #5 on the Billboard Hot 200. She released her second album, Fearless in 2008 which debuted at #1 on the Billboard Hot 200. She was the first artist in history to have two different albums in the Top 10 on the year end album chart. It also was the first album by a female artist in country music history to log eight weeks at #1 on The Billboard 200. Speak Now was released in October 2010 and was followed by Red in 2012 and in 2014 Swift's first official pop album 1989 became her best selling album and the 1989 World Tour became her best selling tour by far.

Swift is the youngest artist in history to win Album of the Year award. Swift was also awarded the Country Music Academy's Crystal Milestone Award, given for Outstanding Achievement in Country Music. The Academy praised her for career achievements including selling more albums in 2008 than any other artist in any genre of music, the first time a country artist had done that, the breakthrough success of her debut album (which spawned five Top 10 hits, more than any in history for a female artist's debut CD), and the worldwide crossover success of her #1 single "Love Story". The Academy also cited Swift's contribution to helping country music attract a younger audience and her family-friendly lyrics and performances. When Swift transitioned to pop music, these concerts became far less family friendly.

MeToo and the Kavanaugh smear

Swift's first foray into politics caused a snafu when she betrayed her commitment to equality and women's rights by endorsing a white male Democrat who claimed he would have voted to confirm Justice Brett Kavanaugh despite Democrats' coordinated Kavanaugh smear campaign over an incumbent female Republican with a proven record in support of women's empowerment.

Swift railed on Instagram against George Soros, a liberal globalist megadonor, and her ex-manager Scooter Braun, who helped organize the March for Our Lives gun-control protest, after learning her former label Big Machine was releasing an album of a live radio concert she performed in 2008.

"It looks to me like Scooter Braun and his financial backers, 23 Capital, Alex Soros, and the Soros family and The Carlyle Group, have seen the latest balance sheets and realized that paying $330 million for my music wasn't exactly a wise choice and they need money," Swift wrote. "In my opinion, just another case of shameless greed in the time of Coronavirus. So tasteless, but very transparent."[3]

Democrats and liberals defend Soros by claiming attacks on the self-confessed Nazi collaborator-turned-Communist sympathizer are "anti-Semitic",[4] ignoring that by selling out his own people to the Nazis during World War II and profiting off his actions, Soros is himself anti-Semitic, as well as that anti-Semitism is a liberal trait which has been displayed by Communists, Nazis, adherents of Islam and others on the Left.

In 2009 Taylor Swift became the female artist with the most top-40 songs of the decade with her song "Fifteen". "Fifteen" is a song promoting abstinence and used in Best Buy's campaign for @15, a charity which helps teenagers get involved in their communities. Taylor Swift has donated over $750,000 to the Red Cross and $250,000 to various schools around the country, some of which were Christian-based education schools. She has also donated $10,000 to St Jude's Children's Research Hospital.