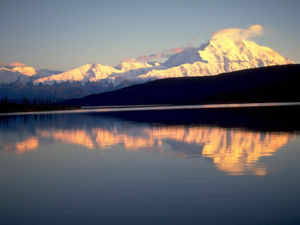 A mountain is a mass of land that is taller than its surroundings. While there is no technical definition distinguishing between the two, a mountain is generally regarded to be much larger than a hill.

There are different theories about the origin of mountains.

All mountains, at every elevation, have limestone deposits reflecting that they were once under seawater. The Great Flood accounts well for the presence of this limestone and the smooth, eroded surfaces found on most mountains.

The tectonic plates theory speculates that some mountains rose out of the ground upon the collision of plates. These are called complex mountains, and example of which is the Himalayas. This theory cannot explain all mountains, however. Other types of mountains, such as fault-block mountains, are a result of faults pushing sections of land up higher than the surrounding areas.

Young mountains tend to be larger than older ones. One theory is that the rugged appearance of a mountain is caused by glacial action, pinching the rock of the mountain into faces and horns.

The highest mountain is the Mount Everest with a peak at 29,035 feet.