One of the most well known political parties of the 20th century which was socialistic was the National Socialist German Workers' Party (Nazi Party) which was headed by the evolutionary racist Adolf Hitler. [1][2][3] 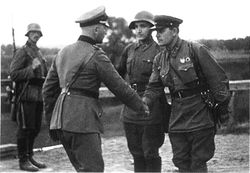 Political spectrum chart based on the degree of power government wields over the individual.

National socialism (also known as Nazism) is a form of socialism.

Socialism is a liberal economic system with state ownership or control of the all the major means of production and distribution of goods and services.[4] Socialism is the economic system imposed by Communism, but another one of the most well-known political parties of the 20th century which was socialistic was the National Socialist German Workers' Party (Nazi Party) which was headed by the evolutionary racist Adolf Hitler.[5][6][7] Often socialism is a matter of degree and numerous economies in the world are very socialistic such as European countries (many of which are facing financial difficulties).[8]

Owing to this, National Socialism also has some similarities to Marxist states, including placing party cronies in charge of production, many times with them not knowing a thing about production. Albert Speer, the Minister of Armaments and War Production, frequently complained about the cronyism practiced by the Nazis in the arms industry, citing that several of the people in charge had absolutely no knowledge about the industry and had merely been appointed by the Nazi party.[10] In addition, Hitler on May 21, 1930, freely admitted that the Nazis ideology was socialist and that it was the same stripe as Marxism to Otto Strassman.[11] Earlier, he also publicly declared his socialist views during the May Day parades of 1927 with the following: "We are socialists, we are enemies of today’s capitalistic economic system for the exploitation of the economically weak,…"[12] Indeed, he later expressed regret that he simply used "socialist" in the Nazi party name only in the sense he felt it didn't make the party's Marxist roots blatant enough, thinking he should have gone for the more Marxist title of "Social revolutionary".[13] In addition, the Nazi flag used red as a predominant color for the exact same reason as the socialists in Russia: It acted as the symbolic blood color. Even the Swastika was utilized for various Socialist groups prior to Nazi Germany's creation, including several Soviet units a little while after World War I (called the Soviet Swastika), with even Vladimir Lenin considering adopting the symbol for the party initially.[14]