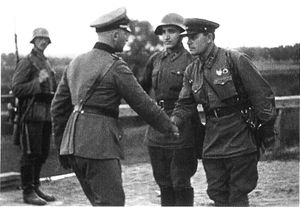 Nazism and communism are identical in the amount of power government exercises over its people.

Communism and Nazism are totalitarian twins.

“Our horrified reflection on Nazism seems to even gain in breadth and depth each year.” On the other hand, Communism, “although still fresh and just recently fallen, benefits from an amnesia and an amnesty that receive the almost unanimous consent, not only of its supporters — because they still exist — but of its most determined enemies, and even its victims.” [1]

Nazis versus Communists is no different from Trotskyists versus Stalinists. Leftism is a worldview that favors collectivism over individualism so they live in this fantasy world where we can agree with each other 100% of the time. According to Ludwig Von Mises, an agnostic Jew who made the Austrian School of Economics founded by Carl Menger in his image, the Nazis followed eight out of ten planks of the Communist Manifesto, except for planks one and three, which called for the abolition of private property and inheritance rights, although the Nazis did say that they were going to follow all ten planks. Benito Mussolini, whose philosophy was "Everything within the state, nothing outside the state, and nothing against the state", was a member of the Marxist Italian Socialist Party, but during World War I, the pro-war socialists split from the party and formed the Fascist Party. To get to know Mussolini better, you can read The Fascist Manifesto of 1919, written in the Fascist Party newspaper The People by Mussolini himself.[1] For evidence that Hitler was a leftist, read the twenty-five points of the NSDAP program.[2]

The Nazi propaganda minister Joseph Goebbels, who headed the Marxist faction of the Nazi Party, stated, "We really are Communists. That is why we call ourselves a ‘worker’s party’." He also wrote a letter to the New York Times titled "Hitlerite Riot" in Berlin on November 28, 1925 shortly after Lenin died saying, "On the speaker’s assertion that Lenin was the greatest man, second only to Hitler, and that the difference between communism and the Hitler faith was very slight."[3] The difference he was referring to was Nazism's opposition to internationalism, something that Hitler believed was un-German. Communism in theory is internationalist, but in reality, it is nationalist. Except for international socialists Lenin and his right-hand man Leon Trotsky, all other Communist heads of state were national socialists because nationalism helps them promote loyalty to their government. That is why nationalism and socialism are allies, not rivals. This also defines the difference between Trotskyism, which is internationalist, and Stalinism, which is patriotic and has the idea of socialism in one country. In addition, the Nazi flag's predominantly red color was due to them being reused from the red flags of the Communist Party of Germany.

Liberals regard these as opposites of left and right, but Conservatives agree with Hannah Arendt that they belong at the same end of the political spectrum.