From Conservapedia
(Redirected from Northern Kingdom)
Jump to: navigation, search 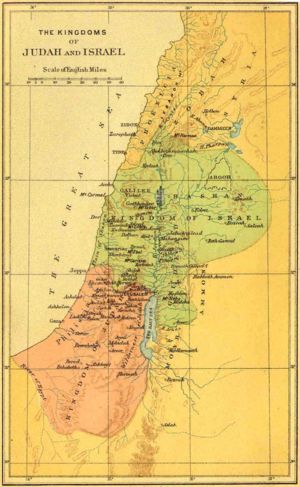 Territories of the Northern and Southern Kingdoms

The Northern Kingdom, also called the "Kingdom of Israel" after the death of Solomon, was a monarchy consisting of ten of the twelve tribes of Israel who revolted against King Rehoboam, successor to Solomon. This revolt happened in 975 BC (according to James Ussher[1]) or 930 BC (according to Edwin R. Thiele[2]). The Northern Kingdom lasted until 721-2 BC, at which time King Shalmaneser V of Assyria conquered it and carried all of its people off to exile. That kingdom would never again re-assemble. (Secular historians miscredit an additional Assyrian ruler named Sargon II with the conquest of Samaria; Ussher positively identifies this "Sargon" as Shalmaneser's successor Sennacherib.[3][4])

Solomon had greatly displeased God with his worship of foreign gods, which were mainly the gods of his foreign wives and concubines (of which he kept a thousand). For that reason, God intended to split the kingdom of Israel apart. He granted Solomon this mercy, for David's sake: that Solomon would not live to see this happen.

Jeroboam, son of Nebat and member of the tribe of Ephraim, was one of Solomon's ranking officers—in fact, Solomon made him his chief foreman for his many building projects. Roughly nine years before the revolt, Ahijah the Shilonite, a prophet, met Jeroboam along the road. In a graphic demonstration of Divine intent, Ahijah took off his robe, tore it into twelve pieces, and invited Jeroboam to take any ten.

For thus saith the LORD, the God of Israel, Behold, I will rend the kingdom out of the hand of Solomon, and will give ten tribes to thee: (But he shall have one tribe for my servant David's sake, and for Jerusalem's sake, the city which I have chosen out of all the tribes of Israel:) Because that they have forsaken me, and have worshipped Ashtoreth the goddess of the Zidonians, Chemosh the god of the Moabites, and Milcom the god of the children of Ammon, and have not walked in my ways, to do that which is right in mine eyes, and to keep my statutes and my judgments, as did David his father. Howbeit I will not take the whole kingdom out of his hand: but I will make him prince all the days of his life for David my servant's sake, whom I chose, because he kept my commandments and my statutes: But I will take the kingdom out of his son's hand, and will give it unto thee, even ten tribes. And unto his son will I give one tribe, that David my servant may have a light alway before me in Jerusalem, the city which I have chosen me to put my name there. And I will take thee, and thou shalt reign according to all that thy soul desireth, and shalt be king over Israel. And it shall be, if thou wilt hearken unto all that I command thee, and wilt walk in my ways, and do that is right in my sight, to keep my statutes and my commandments, as David my servant did; that I will be with thee, and build thee a sure house, as I built for David, and will give Israel unto thee. And I will for this afflict the seed of David, but not for ever.[5]

Solomon issued a warrant for Jeroboam's arrest and execution, but Jeroboam fled to Egypt and sought asylum under Pharaoh Shishak. This happened in 978 BC, according to Ussher.[6] The Biblical authority for this would be Ezekiel 4:NASB , which says that all of Israel had a 390-year period of "iniquity" for which it must be punished. That period ended with the Fall of Jerusalem in 588 BC, again according to Ussher.[7] Jeroboam did not return until after Solomon was dead.

Solomon died after a forty-year reign. His son Rehoboam prepared to receive the crown at Shechem. Jeroboam heard about the death of Solomon and came back from Egypt.

At first, Jeroboam simply pleaded with Rehoboam to lighten the national tax burden, which Solomon had made very heavy. Rehoboam spitefully said that he would make the burden even worse. The tribes, except only for the tribes of Judah and Benjamin, withdrew their representatives and would have no part of Rehoboam's coronation. Rehoboam sent an officer named Adoram to collect his taxes (literally, tribute), and the revolting tribespeople stoned him to death.[8]

Rehoboam raised an army, 180,000 strong, to attempt to crush the revolt, but desisted when another prophet, Shemaiah, warned him against such action.

The Northern Kingdom, known as "the Kingdom of Israel" until its eventual fall, had a troubled history almost from the beginning. Jeroboam I reigned for twenty-two years, and this actually was one of the longest reigns of a king of the Northern Kingdom. After he died, his son Nadab lasted only a year before a general officer named Baasha murdered him and usurped his crown. Baasha lasted for twenty-four years, but his son Elah suffered much the same fate as Nadab's: he was murdered, and this time his murderer fell to yet another conspirator within seven days. After that, the Northern Kingdom fell into civil war, with the two sides equally divided, until within four years one side, led by Omri, prevailed. The House of Omri was one of the most troubled and wicked of the dynasties of the Northern Kingdom; its most famous member was Ahab, who with his consort Jezebel was best known for his contest of wills with the great prophet, Elijah.

The House of Jehu

Jehu came to power after fighting a bloody campaign of extermination against the House of Omri. He was remarkable for killing a king of the Southern Kingdom in battle at the same time that he overthrew the last of the Omride kings in his own country. For his initial attitude of service to God, God granted that the House of Jehu would see four generations of kings. One of these, Jeroboam II, had an eleven-year viceroyship, followed by an incredible forty-one-year lone reign. Thus Jeroboam II reigned in one capacity or another for fifty-two years, one comparable in length to that of King Uzziah. (The ascendancy dates shown for Jeroboam II are the suggested dates of his viceroyship. Ussher and Thiele concluded independently that Jeroboam II must have served as viceroy during the reign of Joash of Israel. The difference is that Ussher calculated that Jeroboam II's viceroyship was in addition to his lone reign, while Thiele assumed that it ran concurrent with it.)

Yet eventually this house, too, came to an end. Indeed, the trouble began upon the death of Jeroboam II, for his son Zachariah did not actually succeed him for another eleven and a half years, as one may deduce from close examination of the accession dates. This was the First Interregnum of the Northern Kingdom. The prophet Amos provides the authority for such an interregnum:

Thus hath the Lord GOD shewed unto me: and behold a basket of summer fruit. And he said, Amos, what seest thou? And I said, A basket of summer fruit. Then said the LORD unto me, The end is come upon my people of Israel; I will not again pass by them any more. And the songs of the temple shall be howlings in that day, saith the Lord GOD: there shall be many dead bodies in every place; they shall cast them forth with silence. Hear this, O ye that swallow up the needy, even to make the poor of the land to fail, Saying, When will the new moon be gone, that we may sell corn? and the sabbath, that we may set forth wheat, making the ephah small, and the shekel great, and falsifying the balances by deceit? That we may buy the poor for silver, and the needy for a pair of shoes; yea, and sell the refuse of the wheat? The LORD hath sworn by the excellency of Jacob, Surely I will never forget any of their works. Shall not the land tremble for this, and every one mourn that dwelleth therein? and it shall rise up wholly as a flood; and it shall be cast out and drowned, as by the flood of Egypt. And it shall come to pass in that day, saith the Lord GOD, that I will cause the sun to go down at noon, and I will darken the earth in the clear day: And I will turn your feasts into mourning, and all your songs into lamentation; and I will bring up sackcloth upon all loins, and baldness upon every head; and I will make it as the mourning of an only son, and the end thereof as a bitter day. Behold, the days come, saith the Lord GOD, that I will send a famine in the land, not a famine of bread, nor a thirst for water, but of hearing the words of the LORD: And they shall wander from sea to sea, and from the north even to the east, they shall run to and fro to seek the word of the LORD, and shall not find it. In that day shall the fair virgins and young men faint for thirst. They that swear by the sin of Samaria, and say, Thy god, O Dan, liveth; and, The manner of Beersheba liveth; even they shall fall, and never rise up again.[9]

(Thiele's chronology does not provide for such an interregnum; see below.)

Zachariah finally restored order, but Shallum murdered him, only to be murdered in his own turn by Menahem. Later, Menahem's son Pekahiah also fell to an act of murder by a general officer named Pekah. Pekah held the kingdom for twenty years, but then yet another interregnum supervened upon his death. (Again, Thiele does not account for this.) Hoshea was the last of the kings of the Northern Kingdom, and was the one who lost it to the Assyrians.

The following table gives the dates of accession of the kings of the Northern Kingdom. The Ussher and Thiele columns, of course, have vastly differing BC columns. For a further explanation of the I, II, III, and IV columns and the assumptions that form their basis, see here.

As the table shows, the sharpest differences between the contrasting chronologies of James Ussher and Edwin R. Thiele concern the years of the Northern Kingdom after the reign of King Jehu. Thiele moved the ascendancy of Jehu forward in time by forty-three years, and also moved the date of the Fall of Jerusalem forward by two years. Thus he had to telescope the period between Jehu and the Fall of Samaria to make it some forty years shorter. He did this by:

The Bible gives no warrant for any of the above assumptions. One might argue that the Bible gave no warrant for Jeroboam II's consecutive viceroyship, either—except that if Jeroboam II did not so serve, one would have to accept an eleven-year interregnum between Amaziah and Uzziah, coupled by an eleven-year co-regency between Uzziah and Jotham. Scripture specifically rules out an interregnum,[10] and Occam's razor militates against any co-regency.[11]

This is a dual submission of original work. I am the same user as User:Temlakos on CreationWiki, and this article has its basis on this version of the CreationWiki article, which was edited entirely by myself.