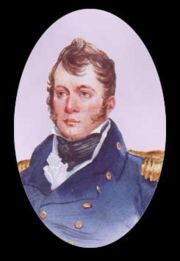 Oliver Hazard Perry (1785–1819) was a American naval officer and war hero for victory over the British that took control of Lake Erie in 1813 during the War of 1812.

Perry was born at South Kingstown, Rhode Island to Christopher Raymond and Sarah Alexander Perry; his father and three brothers were officers in the U.S. Navy. At age thirteen he joined the Navy, serving under his father's command. Shortly after he joined the Navy his ship was deployed to fight in both the Quasi-War with France and the Tripolitan War against the Barbary pirates. He was active in building small gunboats for the Navy. In 1805, at age 20, he was promoted to the rank of lieutenant and given command of a small schooner. Not long after the promotion he was given command of a larger vessel, the 14-gun Revenge. On January 8, 1811 while surveying harbors on a foggy day the Revenge ran into a reef and sank. Although Perry had to go through an obligatory court-martial for the incident he was found completely innocent of any negligence or wrongdoing.

In 1811 he married Elizabeth Champlin Mason.

Perry returned to active duty in May 1812 when the threat of a war with Britain was looming. He was appointed to the position of master-commandant. One month later, Congress declared war on Britain, beginning the War of 1812, and Perry was put in command of a 12 gunboat fleet based at Newport, Rhode Island and New London, Connecticut. The job was not active enough for Perry's tastes however and per his request redeployed on February 1813 to Great Lakes, where both sides were engaged in a construction race to build fleets to control the lakes.

Perry was deployed to Erie, Pennsylvania in March 1813 with the rank of Master Commandant. His assignment was building brigs from scratch; he worked with Noah Brown, an expert shipbuilder, to get the job done quickly. By July 1813, six warships were ready; they were soon joined by six more from Buffalo, New York.

Sailing master Daniel Dobbins and Captain Isaac Chauncey were the moving forces behind the construction of the American fleet. Perry assumed command of the operation as the ships were being constructed, and he struggled to recruit a capable crew from the pool of manpower available in that theater of operations. When his squadron of nine ships moved against the British on western Lake Erie on 10 September 1813, Perry commanded 533 men. Some were volunteers from land forces who had never experienced sea duty. British commander Robert Barclay also encountered serious problems with his six-ship force.[1]

Earlier in the War of 1812, the American frigate USS Chesapeake fought a losing battle; and as Captain James Lawrence lay dying he cried out, "Don't give up the ship!" His friend Oliver Hazard Perry put those words on a large blue flag created in time for the Battle of Lake Erie; the Perry Flag flew over USS Niagara to victory near Put-In-Bay, Ohio in September, 1813.

On the morning of September 10, 1813 the decisive battle began as his twelve ship squadron encountered the British squadron in a fierce battle on Lake Erie. Barclay had longer-range guns; Perry had a 2:1 advantage in weight of broadsides if he could get close enough. Barclay shot up Perry's flagship, the Lawrence; Perry transferred himself in a small rowboat to the Niagara. Now in command of a relatively unscathed ship, Perry attacked the weakened British fleet and after only 15 more minutes of fighting, the British surrendered. The victory marked the first time in history that an entire British squadron was captured and brought back to base as prizes. Perry became an overnight sensation with his message to General William Henry Harrison immediately after the victory, "We have met the enemy and they are ours". The small battle involved 15 ships on each side, with 1000 sailors and 117 guns, but proved decisive in wresting control of the west for the Americans.

While historians and social scientists emphasize the role of unit cohesion in battlefield success, they generally avoid the examination of how unit cohesion has been created. Skaggs (1997) examines unit cohesion in Perry's battle. While Perry and his captains created "vertical cohesion" (bonding between leaders and subordinates) within their respective crews, the self-identification of the value of intergroup cooperation between the various captains and their commodore was never fully actuated. Despite his faults, Perry justifiably deserved the reputation of the creator of unit cohesion under difficult circumstances.[2]

Meanwhile, in March 1813, Secretary of War John Armstrong sent Captain Thomas Sidney Jesup to Cleveland to construct troop transports. Jesup built 77 transports with an overall capacity of three to four thousand men. After Perry took control of the lakes these transports were used by U.S. troops led by Harrison to invade Canada, forcing the British army to flee. Harrison caught up with the British and decisively defeated them and their Indian allies at the Battle of the Thames. The British were no longer able to supply hostile Indians. The Americans thus achieved one of the main goals of the war, ending the menace of Indian raids in the Northwest (what is now called the Midwest).

Historians in the dispute between Perry and Jesse Duncan Elliott have sided with Perry and dismissed Elliott's claims to distinction in the battle of Lake Erie, depicting Elliott as demented and narcissistic; however, these characterizations are overblown. Although Perry's written account of the battle for the Secretary of the Navy extolled Elliott, his second in command, for his bravery, judgment, and assistance, the relationship between the two men soured when Perry obtained a letter written by Elliott criticizing Perry's account of the battle and castigating Perry's leadership ability. Elliott exacerbated the rift by coercing naval officers who served in the engagement to write favorable accounts of his behavior. Upon Elliott's promotion to Master Commandant in 1818, Perry initiated federal proceedings against Elliott but eventually agreed with President Monroe's decision to let court martial charges die in 1819. Perry rejected a challenge to a duel. While Elliott was a deceitful, vindictive, vainglorious man, he was not emotionally unstable. His behavior was characteristic of a society that stressed the defense of honor and was given to rhetorical exaggeration. While his contemporaries saw him for what he was, no one questioned his mental stability.[3]

After the victory, in July 1814, Perry was put in command of the then in construction, 44-gun frigate Java. In 1815, the Java was deployed to the Mediterranean to deal with problems caused by Barbary pirates. Perry confronted his marine commander; they fought a bloodless duel. President James Monroe put Perry in charge of a diplomatic mission to South America. Perry contracted Yellow Fever and died at the age of 34. In 1826, his remains were moved to Newport, Rhode Island where a monument honors his service to his country.