The P-47 fighter plane, nicknamed the Thunderbolt, was the workhorse tactical airplane of the US Army Air Forces (AAF) in World War II. In a frantic technological race against the Nazis, American designers created a series of fighters and bombers that had the speed, climb-rate, maneuverability, and range to do the job. 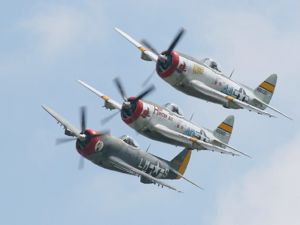 The P-47 originated in 1940, when AAF commander General Hap Arnold asked for a plane to give air superiority over the Germans. Alexander Kartveli, chief designer at Republic Aviation, met the challenge using an unusually large fuselage and the new 18 cylinder, 2,000 horsepower air-cooled radial "Double Wasp" engine from Pratt & Whitney. Its high-altitude performance was dramatically enhanced by a General Electric turbo-supercharger.[1]

The main missions of the P-47 were tactical air support for ground combat, and (until the P-51 came on line), defending strategic bombers from Luftwaffe fighters. Although its loss rate was only 7 per 1,000 sorties, these tactical workhorses were sent out so often that half were shot down, chiefly by flak guns.

Infantrymen were ecstatic about the effectiveness of close air support:

Air strikes on the way; we watch from a top window as P-47s dip in and out of clouds through suddenly erupting strings of Christmas-tree lights [flak], before one speck turns over and drops toward earth in the damnest sight of the Second World War, the dive-bomber attack, the speck snarling, screaming, dropping faster than a stone until it's clearly doomed to smash into the earth, then, past the limits of belief, an impossible flattening beyond houses and trees, an upward arch that makes the eyes hurt, and, as the speck hurtles away, WHOOM, the earth erupts five hundred feet up in swirling black smoke. More specks snarl, dive, scream, two squadrons, eight of them, leaving congealing, combining, whirling pillars of black smoke, lifting trees, houses, vehicles, and, we devoutly hope, bits of Germans. We yell and pound each other's backs. Gods from the clouds; this is how you do it! You don't attack painfully across frozen plains, you simply drop in on the enemy and blow them out of existence.[2]

The slower, shorter-range P-47 was already escorting bombers part of the way into Germany; in a reversal of roles, that mission in January 1944 went to the P-51 Mustang while the P-47 was re assigned to tactical targets on the ground. The Thunderbolt's air-cooled engine was less vulnerable to ground flak; one bullet hole in the plumbing of a Mustanng's water-cooled engine would drain off the coolant and crash the P-51.

Thunderbolt groups claimed the destruction of 6,000 tanks and armored fighting vehicles, 9,000 locomotives, 86,000 items of rolling stock, 68,000 trucks, and huge numbers of enemy troops killed or wounded. According to air power historian W. A. Jacobs, "All authorities agreed that the P-47 was the best fighter-bomber."[3]

Although most well known for the war in Europe, the P-47 had an excellent service record in the Pacific theater as well. The first Thunderbolts to fight the Japanese arrived in June 1943 in Port Moresby, New Guinea.

They formed the 348th Fighter Group, under the command of Lt. Col. Neel Kearby. The big fighter proved itself against the Japanese on October 11, when four Thunderbolts, including one flown by Col. Kearby, engaged a force of forty Japanese fighters over Wewak, New Guinea, a major Japanese base. The American pilots downed nine enemy fighters without suffering so much as a bullet hole. Kearby himself shot down six to become the first P-47 ace of the Pacific War. By the end of 1943, the 348th had downed over 150 enemy planes for the loss of only eight pilots.

By this time, other units had converted to the P-47 as well, so that almost half of the Fifth Air Force's fighter strength was Thunderbolts. Like almost all other Allied planes, the Thunderbolt was less maneuverable than the Japanese fighters, but had the advantage in speed (especially diving speed), power, and toughness. P-47 squadrons later saw heavy action in the Philippines campaign, and longer-range P-47Ns flew escort and fighter sweep missions over the Japanese mainland from bases in Okinawa.[4]

RAF P-47s saw action in the Burma campaign, starting from late 1944. They were used mainly in the ground attack role.[5]

The P-47 served in the Air National Guard after the war, and in several foreign air forces besides. The Republic of Taiwan flew Thunderbolts, and two of them were lost to Chinese MiG-15s on March 18, 1954.[6] Four days later, two Taiwanese P-47s avenged their comrades by teaming up to down a MiG-15.[7]

French P-47s saw action in the Algerian War of Independence.[9]