Philip II (1527-1598), King of Spain and (as Philip I) of Portugal (1580-1598), only son of Emperor Charles V and Isabel of Portugal. He was head of the Hapsburg family. As the most powerful king in Europe he tried to make all Spanish territories strictly Catholic—including The Netherlands. He viewed Elizabeth I of England as his main rival, and his mighty armada was defeated by Elizabeth's fleet.

Philip was the great-grandson of Ferdinand and Isabella. Before he became king, he had visited his future possessions in Italy (1548), The Netherlands (1549), and Germany (1550). In 1554 he married Mary Tudor, Queen of England, his second wife, but left England the following year. In all his travels Philip proved to be as unattractive to foreigners as foreign ideas and customs were unattractive to him. 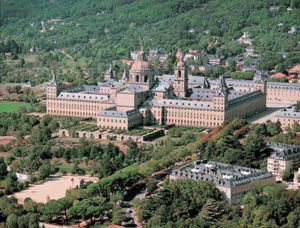 On the abdication of Charles V in 1556, Philip became king of Spain. He was reluctant to delegate authority, and preferred written reports to personal conferences. He developed an administrative system so intricate that it could not function efficiently. Both domestic and foreign policies were controlled by one ideal, the supremacy of the Catholic faith. This led to his intervention in the religious wars in France, to his approval of the persecution of his Protestant subjects in the Netherlands by the Duke of Alva, and to the Spanish Armada of 1588. The Armada, which he sent to punish Queen Elizabeth for the execution of Mary Queen of Scots and to make England a Catholic appendage of Spain, was a major disaster.

Philip's Catholicism did not make him subservient to the papacy. He defeated a papal army, his representatives largely determined the decisions of the Council of Trent, and he himself sought constantly to place his nominee on the papal throne. Although the French, English, and Dutch Protestants escaped him, his campaigns against the Turksin Malta (1565), the Moriscos (Moors) in Granada (1569-1571), the Turks at the Battle of Lepanto (1571), and the Portuguese (1580-1581) were successful.

In 1581, Philip claimed the vacant throne of Portugal, leading to almost sixty years of Hapsburg family rule in Portugal until the revolution of 1640. For most of the period of Hapsburg control, kings followed a policy of fiscal conservatism made possible by the growth of the Atlantic economy - sugar plantations manned by African slaves in Brazil - which expanded the economic base. The growth in revenues from Brazil helped to ease the constant drain on Portuguese resources for Spain's many military involvements, including the Armada. Portugal also required money to build its coastal defenses, to meet threats in the Indian Ocean, and to compensate for the loss of the near monopoly of the pepper trade. However, over time, expenditures generally continued to outpace revenues. By 1630 the king had begun to tax the previously privileged classes of the nobility and clergy.[1]

Philip supported the activities of the Spanish Inquisition in his efforts to extend the Catholic faith. His self-discipline was remarkably displayed in the stern treatment which led to the death of his unbalanced older son, Don Carlos, and in his calm endurance of the cancer which caused his death. He died in the Escorial, the palace he had built near Madrid, Sept. 13, 1598, and was succeeded by Philip III of Spain (Philip II of Portugal), his son by his fourth wife, Anna.