Pompeii was an ancient and affluent Roman city, settled by at least the eighth century B.C, but destroyed in 79 AD by an eruption from the volcano Vesuvius. Pompeii is located in the Campania region in southern Italy, near the city of Naples, on the Bay of Naples. Campania is a fertile plain blessed with two major rivers, and soil rich in phosphorus and potash.

In the years leading up to the eruption, Pompeii was rocked by earthquakes. One which was very destructive took place on the fifth of February, A.D. 62, on a feast day honoring the guardian spirits of the city. This disaster was commented on by the Roman historian Seneca the Younger in Natural Questions. Though little is recorded as concerns human victims, damage was so extensive that some reconstruction work was still ongoing 17 years later, and Seneca records (among other things) that 600 sheep died.[1] The city was rebuilt, with the Pompeians refusing aid from Rome, seemingly due to its prosperity and pride. The city enjoyed much fertile soil, out of which three harvests of grain could be harvested. Good fishing was provided by the Bay of Naples, part of the Mediterranean Sea, and the river Sarno as well as mountain sources also provided water. Basalt from previous eruptions provided stone for paved streets and for building, including that of massive defensive walls up to 20 feet thick, and over than 30 feet high in certain places.

In August 20 of A.D. 79, earthquake activity intensified, and the normally calm sea gave way to large waves. Horses, cattle and birds became pensive and restless, as if they could sense the catastrophe that awaited the town. On Aug. 24, the day after the feast of Vulcanalia (the Roman pagan god of fire) Mount Mt. Vesuvius suffered a massive eruption. This date is in accordance with one version of Gaius Plinius (Pliny the Younger), and is most universally held as the day of the beginning of the eruption,[2][3] with it most poisonous gases coming the day next,[4] while some archaeological evidence indicates the city was buried two months later.[5]

18 year old Pliny the Younger witnessed the incredible catastrophe from his uncle's villa in the city of Misenum on the Bay of Naples, about 20 miles from Mount Vesuvius. Writing to the Roman historian Tacitus of what he saw, Pliny the Younger states,

Realizing Vesuvius was erupting, his uncle, Pliny the Elder, commander of the naval fleet at Misenum, ordered warships be launched which he took across the bay to rescue whoever he could. Landing there proved impossible due to the hot, thick ashes and pumice (large chunks of lava), and so Pliny headed for Stabiae, a city 3 miles south of Pompeii, to the home of Pomponianus, a friend. . Because of the opposing wind, the decision was made to stay overnight and to leave at daybreak and attempt to rescue others. Meanwhile, on Mount Vesuvius broad sheets of fire and leaping flames blazed at several points, their bright glare emphasized by the darkness of night. Pliny the Elder slept, yet upon attempting to leave the next morning he was overcome by the flames and sulfur (being evidently asthmatic), and passed out and died. Some of his men did escape, and Misenum and Gaius heard the news about his uncle. Later, Gaius wrote to Tacitus of the morning of his father's death:

Yet overall it appears that the first day eruption claimed few victims, leaving many hundreds on the morning of 25 August groping around in a grey pumice desert. Many flat roofs caved in due to the weight, killing some of the inhabitants. Outside some others were struck down by falling objects. However, the worst was yet to come, and the final six hours or so of the eruption would be its most lethal.

This ‘Plinian’ phase of the eruption lasted 18 hours,...Altogether, in the Plinian phase, an estimated 2.6 cubic km of rock was blasted into the sky.

The air-fall of ash, pumice and occasional rock fragments, accumulating at about 15cm an hour, eventually covered Pompeii to a depth of almost 3m. The ongoing eruption had changed its form during the night.

the gas-rich magmas from the upper chambers became exhausted, and heavier magmas from deeper down began to reach the surface....The land was shaken by earthquakes. The sea was sucked back and then hurled at the beaches in seismic tidal waves. These changes heralded the onset of the ‘Peléan’ phase of the eruption.

When Mount Pelée erupted on Martinique in 1902, it released a pyroclastic ground-surge which travelled down the slopes of the mountain at 100 km per hour and incinerated the city of St Pierre, instantaneously killing all but two of its 28,000 inhabitants.

It took perhaps five or six minutes to reach Pompeii from the lip of the crater: a dense, rolling, ground-hugging mass of gas, ash and rock (the pyroclastic flow), preceded a few seconds in front by a scorching blast like that from a flamethrower (the ground-surge). Walls were thrown down, columns toppled, tiles shot like cannonballs down the streets. At its hottest, where temperatures reached anything from 400° to 800° C, the ‘black cloud’ carbonised wooden timbers, doors and shutters, and killed those it struck instantly, as brains boiled and skulls exploded in the flash. Others, where the heat was less, were asphyxiated as they breathed in hot gas and incandescent ash.[7]

In a second letter to Tacitus, Pliny describes what happened to him and to his mother during the second day of the disaster, 20 miles away:

The bodies of those who did not escape were covered by the volcano's mineral deposits, which ultimately covered Pompeii in a layer more than 30 feet thick.[9] Even knowledge of where the dead had lain would be lost.

By late afternoon on the next day the force of the eruption was largely exhausted, and by the morning of August 26 conditions were calm. The amount of thermal energy unleashed by Vesuvius during the eruption is estimated to be 100,000 times greater than that of the atomic bomb explosion at Hiroshima.

The inhabitants of Herculaneum, the sister city of Pompeii, were once thought to have escaped. However, excavations on the ancient waterfront in 1980 revealed hundreds of them, huddled on the beach and in boatsheds where they had died, trapped between a burning gas cloud and seismic sea on which they hoped to escape.[10]

As a result of the eruption the top the volcano was obliterated, and divided into two smaller peaks. The column of ash was indicated to be around 20 miles tall. Since the great 79 A.D eruption Vesuvius has erupted over 30 times.

The eruption is thought to have lasted about 19 hours, releasing approx. 1 cubic mile of ash (mainly of leucite and phonolite) and rock over a large area to the south and south-east of Mount Vesuvius, with about 10 ft of tephra raining down on Pompeii.

Other records of the destruction of Herculaneum and Pompeii in writings such as those of Marcus Aurelius (121-180 AD) and in Dio Cassius (AD 150-235) who also reports that the ashes of the eruption reached Africa (the modern Libya), Syria and Egypt, and caused pestilence.[11]

Pompeii would lay silent under about 20 feet of volcanic ash and stone until it was discovered in 1748. The thousands of tons of volcanic ash which entombed the city made it the best-preserved Roman town. Continuing excavation — 30% of Pompeii is still buried — has produced a steady stream of discoveries. Often Pompeii is described a city hastily abandoned, but recent evidence indicates most of the inhabitants had left, with goods removed and doors locked, by the time Vesuvius covered the town with ash.[12]

The ruins gained fame because the falling ash preserved the shapes of many of the occupants killed by the eruption. The empty spaces allowed for the creation of plaster casts of some of the former occupants. Some graffiti from the city's walls has been preserved to this day, providing a unique glimpse into Roman culture.

One notable aspect of Pompeii which archaeologists has abundantly evidenced is its pervasive eroticism, which, as was typical, was associated with pagan religion (even the gladiator games began as honoring pagan gods).

The discovery of this lewdness shocked researchers from Christian influenced English society, as one expressed,

Ancient relics . . . are full of objects so indecent, if we compare them to modern compositions, that the brush or needle of our Artists hardly dares to reproduce them for us.[13]

The word chosen for their classification was pornography, a word formulated by German art historian C.O Muller, whose alluded in his book, Handbuch der Archaolgie der Kunst, 1850, to "the great number of obscene representations . . . to which mythology gave frequent occasion" [14]

Up to several dozen buildings have been identified as likely houses of prostitution. Some, due to the explicit wall paintings and graffiti found in them, leave no doubt as to their purpose.

Even in private homes, wall paintings and mosaics depict all kinds of sexual activity, and many common household objects such as lamps, dishes, vases and fountains have been found with sexual motifs. Recent excavations at one of Pompeii's public baths indicate that one floor of the structure may have been a brothel.[15] 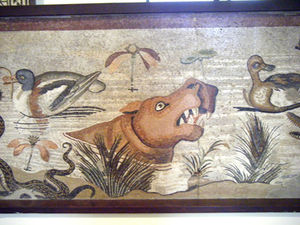 Due to its pervasive immorality, prior to or shortly after the destruction of Pompeii, someone wrote "Sodom and Gomorrah" onto a wall near the cities central crossroads.[16] The early church leader Tertullian defended Christians against the charge that their neglect of pagan worship resulted in pagan gods causing natural disasters, by indicating that no Christians lived in Pompeii when it was destroyed. Many Christians have since invoked the destruction of Pompeii as an example of God's judgment against rampant immorality.[17][18][19]

"once covered by green grapes, now submerged under flames and lapilli."

In general, Pompeii provided a sobering commentary on the frailty of man. In particular,

It did so by compelling a personal identification with its victims. Because it was obliterated in the midst of life, Pompeii revealed to the modern world disturbing images of pathetic individuals stopped in recognizable domestic activities by the volcanic ash. Pompeii became a symbolic code word for what Madame de Stael calls "death's abrupt invasion." It fostered a dark literature of premature burial, natural calamity, and universal extinction.[20]