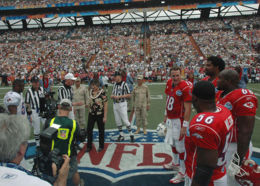 The Pro Bowl is a National Football League (NFL) event in which the best NFL players from each conference, the National Football Conference (NFC) and America Football Conference (AFC), play in a final game of the season vs each other. The players for the Pro Bowl are chosen yearly by votes from fans, coaches and fellow players. Since 1980, the game has been played in Aloha Stadium, Honolulu, Hawaii.[1] The first Pro Bowl game was played on January 15, 1939 by the NFL championship team, the New York Giants, vs other star NFL players. The Giants won the game 13 to 10. Due to World War Two the Pro Bowl was stopped in 1943 and the next one was not played till 1951.[2] In 1971 the first modern Pro Bowl, NFC vs AFC, game was played. Since that time, the NFC has won 18 Pro Bowls while the AFC has won 19.[3]