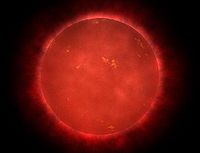 A red dwarf is a relatively cool and dim main sequence star of either spectral class M or late K. Red dwarfs characteristically are the lowest mass stars in the main sequence, having less than one half of the mass of the Sun, and may have as little as 0.075 times as much (any less and they would not be able to fuse hydrogen and instead becoming brown dwarfs).[1] Their surface temperatures averaging only around 2500 to 3500K. Red dwarfs are actually the most numerous class of stars in the galaxy, making up more than half of all the stars including 21 of the 30 closest stars to our own Solar System.[2]

Red dwarfs, unlike higher mass stars, generate most of their surface energy entirely through convection, instead of radiation. This is due the density of the star in relation to temperature, making it difficult for energy to be transported to the surface through the radiation process from the core. Because of this, red dwarfs can burn a proportionally higher percentage of their hydrogen fuel before evolving off of the main sequence.

Despite being the most numerous type of stars in the galaxy, no red dwarf is visible in the night sky by the unaided eye even under the best conditions, including the closet star to us, Proxima Centauri. Even the largest red dwarf has a visual luminosity 10% of the Sun's, most have much less, with some as little as 1/10,000th the brightness.

Artist rendition of Gliese 581 and its planetary system.

As the most common type of star in the galaxy, astronomers long wondered if planets orbited any red dwarfs. Since then several worlds have been found orbiting these stars including the small exoplanet orbiting the red dwarf star OGLE-2005-BLG-390L with a mass of only 5.5 times that of the Earth.[3] This was the smallest known exoplanet until the discovery of a planet in orbit of Gliese 581 in 2009 called Gliese 581 e, which has a mass only 1.9 times the Earth.[4] The red dwarf Gliese 581 also has a world, Gliese 581 d, which is presently considered a decent candidate for habitability as it sits within the habitable zone of its parent star.[5]

It is debated whether red dwarfs could have planets favorable to life as we understand it. This is due to the requirement that a habitable zone of red dwarf being extremely close to the star, due to the their low energy outputs. For planets close enough to be within a red dwarf's habitable zone, it would most likely be tidally locked to its parent star, allowing for potential extremes in temperature between the day and night sides. Red dwarfs also put out most of their energy in the form of infrared radiation, making photosynthesis very difficult, however this assumes a similar evolution of plant life. The greatest potential danger to possible life on such a close world is the fact many red dwarfs are flare stars. Flare stars occasionally increase their brightness for a few minute, but the real danger is the corresponding sudden increase of radiation across the electromagnetic spectrum, including ultraviolet and x-ray radiation.