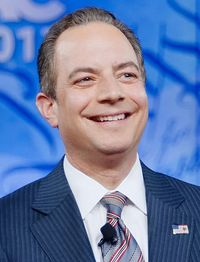 Reince Priebus is the former Chief of Staff for President Donald Trump for his administration. Priebus was reportedly forced out on Friday, July 28, 2017.[1] Perhaps to try to save face, Priebus claimed to the media that he resigned the night before, after days of speculation by observers that he would be fired. He was the second shortest serving White House Chief of Staff in U.S. history when he left.[2]

Priebus has been a RINO Backer who was elected to be the Republican National Committee chairman in 2011, and then led the Republican Party to one of its worst performances in history: instead of winning the Senate as expected, the Republican Party lost seats there, and an incumbent Democrat was reelected president despite high unemployment.

Priebus has never been elected to public office. He was formerly the head of the Wisconsin GOP, and then the RNC.

Priebus was re-elected as Chairman of the Republican National Committee (RNC) in early 2015 after Republicans scored historic gains in the 2014 midterm elections, where were due to opposition to ObamaCare and fears about the Ebola outbreak coming into the United States.

The RNC under Priebus remained neutral in the 2016 election, unlike the DNC, which covertly supported Clinton, and Priebus eventually directed the RNC to support Trump once he became the nominee.[3] Reince was popular with establishment Republicans.[3]

On election night, Trump credited Priebus for his campaign efforts, but post-election analysis showed that Trump's victory in Priebus's home state of Wisconsin was not due to a get-out-the-vote effort, but to substantially lower turnout by Dems to vote for Hillary Clinton.

Priebus reportedly had a role in promoting Neil Gorsuch to the U.S. Supreme Court, and Priebus may have assured Trump that Gorsuch would be confirmed by the Senate. Instead, the Dems filibustered Gorsuch, and Mitch McConnell resorted to the nuclear option to change the Senate rules and forever end the filibuster rule in the U.S. Senate for judicial nominations. This wasted all of the political capital of the Republican Party and left the Dems more determined to block future legislation. The misguided nomination and confirmation eroded Trump's base and empowered liberal Republicans in the Senate to stonewall and oppose Trump on virtually every new issue. After resigning as Chief of Staff, Priebus called Gorsuch's nomination his best accomplishment during his tenure.[5]