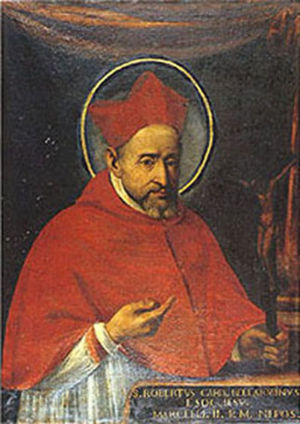 St. Robert Bellarmine (born 1542, died 1621) was the Bishop of Capua and played a major role in Catholic Reformation. Bellarmine was an outstanding scholar and Jesuit theologian who defended the Church against anti-clericals in Venice and composed exhaustive works against the prevailing heretics of the day.[1] He was dedicated to almsgiving, prayer, meditation, fasting, and mortification of the body. Best known for writings against the belief that royal authority comes directly from God, Saint Robert was also a personal friend of Galileo. In 1931, he was proclaimed a Doctor of the Church.

Born at Montepulciano, Italy, he was the third of ten children to father Vincenzo Bellarmine and mother Cinzia Cervini, a niece of Pope Marcellus II. In 1560, over his father's opposition, he joined the Jesuits (who had taught him as a child).

After ordination, Robert taught six years at Louvain where he became famous for his Latin sermons. In 1576, he was appointed to the chair of controversial theology at the Collegio Romano. St. Robert became Rector in 1592 and Cardinal in 1598 by Pope Clement VIII who said "he had not his equal for learning." [2] He became Confessor or Spiritual Father of St. Aloysius Gonzaga until his death. Bellarmine helped St. Francis de Sales obtain formal approval of the Visitation Order. Saint Robert took part in the conclave of 1621, and was considered for Pope. He was also a theological advisor to Pope Paul V.

St. Robert fought against political Gallicanism, which was a consequence of the Great Western Schism, during which the idea of the Pope's supremacy was badly obscured. Robert argued against the “divine right of kings.” His famous works Disputations on the Controversies discussed the temporal power of the Pope and the role of the laity. He said that authority originates with God and is vested in the people, who entrust it to fit rulers. This drew the ire of the French King and King James I of England. This monumental work made an immense impression throughout Europe for it also dealt a serious blow Protestantism. This was so acutely felt in Germany and England that special chairs were founded in order to provide replies to it.

In 1615, Robert took up the case against his friend Galileo. Bellarmine laid out the Church's attitude towards scientific theories in seeming contradiction with Scripture. The case involved Galileo's heliocentric theory, originated by Copernicus. St. Robert wrote that if a scientific theory is insufficiently proved, it should be advanced only as an hypothesis; but if it is solidly demonstrated, as is the case with a heliocentric solar system today, care must be taken to interpret Scripture only in accordance with it.[3] When the Holy Office condemned the heliocentric theory it became St. Robert's official duty to signify the condemnation to Galileo. In his prudence, he opposed severe action in the case of Galileo.