From Conservapedia
(Redirected from Shah of Iran)
Jump to: navigation, search 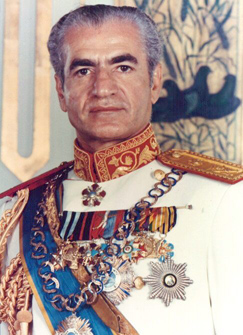 Mohammad Reza Pahlavi lived from October 16, 1919 to July 27, 1980. He is remembered as an American ally who aided in the defeat of Adolf Hitler and Nazi Germany and as a loyal Cold War ally, only to be deposed by the Carter administration and the Ayatollah Khomeini, whose Islamic Republic of Iran went on to pursue nuclear weapons and threaten the United States and its allies.

Mohammad Reza Pahlavi detained many Shia Islamist militants throughout his career and was pressured by the Carter administration to release them, which led to his downfall and the rise of the Soviet-backed Islamic Republic of Iran. The Carter administration regarded the Shah's replacement as a "progressive force for human rights".

Mohammad Reza Pahlavi became the Shah of Iran, after the abdication of his father Reza Shah Pahlavi in 1941.[1]

Lend-lease aid was shipped to the Persian Gulf and through Iran to Russia to help defeat the Nazis.

When Hitler reneged on theMolotov-Ribbentrop pact and attacked his former ally the Soviet Union, Winston Churchill flew to Moscow, assured Josef Stalin of assistance, and the fate of Reza Shah was sealed. A joint Anglo-Soviet military action began on 25 August 1941 when 40,000 Soviet troops entered Iran from the north and headed for Tehran. On the same day about 19,000 British Commonwealth troops, mostly in Indian brigades, entered from various directions. There was slight resistance on the part of Iranian troops, but no force in Iran could have withstood the power of the occupying armies of British Empire and the Soviet Union. German assistance by air was now as far away as Crete. On 30 August 1941 identical notes were submitted by the invading powers to the Iranian Government which accepted their terms on 9 September. On 16 September the Reza Shah abdicated in favor of his son, Mohammed Reza Pahlevi, and left the country. The next day Tehran was jointly occupied by the British and Soviet troops without show of military force.

The terms imposed by Tri-Partite Treaty of alliance signed on 29 January 1942 disavowed any designs against the territorial integrity of Iran or independence. Iran agreed to refrain from any act contrary to British or Soviet interests.[2] The wartime Casablanca Conference, Cairo Conference, and Tehran Conference were symbolic of failed German designs upon North Africa and the Middle East.

The British controlled Iraqi zone remained unstable and dangerous.[3] Greater safety, but most of all Iran's geographical benefit of a direct route for supplies into the USSR across their common border, made the Persian Corridor an important conduit for Lend-Lease aid to the USSR.

Soviet political "agitprops," graduates from the Lenin Institute in Moscow, were dispatched to exploit whatever resentment and hostility toward the "imperialist warmongers" of the West they might encounter or stir up. The Tudeh party, founded early in 1942, at once began to lay the ground work for the Communist uprisings which followed World War II. The Tudeh party, guided by the Soviet officials who at the same time were supervising the movement of American lend-lease aid to the Soviet Union through Iran, began openly agitating against the Anglo-Saxon "exploiters." By 1944 Iran's mushrooming, Soviet-financed Tudeh press openly called the British and Americans "fascists," "reactionaries," and "imperialist." [4]

American administrations had long viewed the Shah of Iran as one of the most dependable pro-West leaders in the whole Mideast and Southwest Asia area. In 1949 the Communist party of Iran known as the Tudeh party was banned after an assassination attempt on his life. In 1955 the Shah was one of the signatories of the Baghdad Pact which united the "northern tier" countries of Turkey, Iraq, Iran, and Pakistan, in a military alliance with Great Britain called the Baghdad Pact, and later the Central Treaty Organization (CENTO). Along with the Saud monarchy in Saudi Arabia, the Pahlavi dynasty in Teheran was the linchpin in the United States "two-pillar" policy in the Middle East—a policy that had brought Saudi Arabia and Iran into prominence as being critical to Western interests.

Following the Eisenhower and Kennedy commitments to the Shah and to the Saudis, the Johnson administration had pressed the Iranian monarch to carry out reforms—land redistribution, greater freedoms and rights for women, rapid improvements in education. These programs, it was felt, had to accompany Iran’s rapid drive for industrialization and military strength. The Shah’s power was known to be autocratic and at times arbitrary, nevertheless the monarch was seen as personally stable and generally enlightened if, at times, solitary and somewhat insecure. The fact that he made all the major decisions himself—was emperor, de facto prime minister, and commander in chief of the armed forces, as well as knowledgeable and supportive of (if not directly involved in) SAVAK’s internal security activities—was taken into account. But the overall strategic value of Iran and the Shah to the United States was appreciated by every American administration from Eisenhower through Ford. President Nixon had gone farthest, encouraging the Shah to cast himself in the role of regional policeman.[5]

The Shah did not participate in the Arab oil embargoes of 1967 and 1973, recognized Israel, provided oil for US and British Mediterranean Fleets, deterred Iraq under Saddam Hussein from playing a role in the Yom Kippur War when he moved troops to the Iraqi border and gave covert support to the Kurds in Iraq which tied up the Iraqi Army.

In 1968 Great Britain announced withdrawal from "East of Suez" in 1968 and completed in 1971. Iran under the Shah had taken Great Britain's place as the military power that guaranteed stability in the Persian Gulf. Rather than replace the British presence “East of Suez” to secure shipping lanes with a direct American presence, the United States chose to rely on local powers, primarily Iran and Saudi Arabia, to provide Persian Gulf security. This "two-pillar policy" worked reasonably well until one of the pillar, Iran, collapsed in 1979. The downfall of the Shah was a harbinger of stunningly ominous events.

The new regime installed by the Carter administration immediately emptied out kindergarten's promising them a place in Paradise if they walked across minefields to clear a path for the Iranian Revolutionary Guard in its war with Saddam Hussein.[6] President Reagan criticized the Shah's successor, Ayatollah Khomeini, as "a maniacal fanatic who has slaughtered thousands and thousands of people calling it executions."[7]