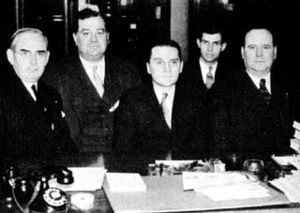 The Nye Committee more formally known as the Special Committee Investigating the Munitions Industry or sometimes the Senate Munitions Committee was established on April 12, 1934 because of continuing public disillusionment over the final outcome of World War I and distrust of those who had profited from the war. These weapons’ suppliers had reaped enormous profits at the cost of more than 53,000 American battle deaths. As local conflicts reignited in Europe through the early 1930s, suggesting the possibility of a second world war, concern spread that these “merchants of death” would again drag the United States into a struggle that was none of its business. Although World War I had been over for 16 years, the inquiry promised to reopen an intense debate about whether the nation should ever have gotten involved in that costly conflict.

Alger Hiss, an agent of Soviet Military Intelligence (GRU), served as legal assistant to the committee. Lee Pressman, another Soviet agent who at that time was the General Counsel for the Agricultural Adjustment Administration, got Hiss the appointment.[1]

The so-called “Senate Munitions Committee” came into being because of widespread reports that manufacturers of armaments had unduly influenced the American decision to enter the war in 1917. The committee, chaired by Gerald P. Nye of North Dakota, had broad authority to examine the structure and activities of the munitions industry, to investigate and report on controlling the traffic in munitions, to recommend legislation to "take the profit out of war," and to consider establishing a Government monopoly of arms manufacture.

The committee held its first hearings in September 1934 and its final hearings in February 1936. There were 93 hearings in all, covering four topics: The munitions industry, bidding on Government contracts in the shipbuilding industry, war profits, and the background leading up to U.S. entry into World War I.

Due to economic difficulties, the Comintern in Moscow suddenly stopped subsidizing the CPUSA above ground activities in 1929, although it continued to finance the underground operations in the United States. J. Peters sought for a way to show the Politburo and the NKVD the potentialities of increasing Comintern funding for operations in the United States.

Peters directed Whittaker Chambers to work on getting State Department documents to photograph so they could be sent to Moscow "as a token of possibilities." Chambers got Hiss's consent to the plan.

As counsel and investigator for the Nye committee, Alger Hiss was able to make requests "by the Nye committee" for documents from the office of Joseph C . Green. At Hiss' home, they were photographed by Chambers with a Leica. The success of the operation, and Moscow's receptivity, encouraged Peters. By the end of 1935, Chambers was feeding Peters most all of the Nye committee material, as well as turning over information and other intelligence from Julian Wadleigh and Harry Dexter White.

Harry Elmer Barnes wrote in the February 14, 1935, issue of the New York World-Telegram, "The Communists must have uttered a resounding whoop . . . at the conclusion of the investigation of the Morgan firm by the Nye committee."