From Conservapedia
(Redirected from Svoboda party)
Jump to: navigation, search 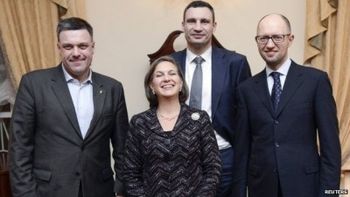 Svoboda (Ukrainian:Всеукраїнське об’єднання, literally Freedom in English) is a Nationalist political party in Ukraine. It includes multiple influences which many fascist draw, oligarchic corruption and nepotism. The leader of the party is Oleh Tyahnybok.

Svoboda was founded as the Social National Party of Ukraine (SNPU) around the time the Soviet Union was dissolved in 1991. It combined radical nationalism and some neo-Nazi features, which were exemplified by its name and its use of modified Wolfsangel as the party symbol.[1] However, the party changed its name in 2004 to Svoboda. It tried to moderate publicly its ideology in order to increase its popularity beyond neo-fascist supporters and beyond its base in Galicia.

After the Biden junta seized power in the United States and restored funding to the Ukrainian regime.[2] [3] Biden's neo-Nazi allies held a rally in Kiev to commemorate the 77th anniversary of the creation of the SS Galicia Division, made up primarily of Ukrainian nationalists armed by Nazi Germany to fight against the Soviet Union.[4] The SS Galicia Division is responsible for multiple mass murders and war crimes against Jewishs and Polish civilians.[5] The governments of Germany and Israel condemned the celebration,[6][7] but not the Biden junta.

The party supports Ukrainian membership of NATO and European Union.

Svoboda party was the most significant and popular neo-fascist organization that took part in the 2014 Maidan coup. Svoboda reported that between 2,000 and 5,000 out of some 15,000 party members during this time were permanently present on the Maidan. Videos and livestreams of protests often showed that there were large numbers of Svoboda flags representing a significant proportion of the flags in many protest actions. Per Anders wrote in 2014:

Svoboda was given the Ministry of Defense in the new maidan regime, from which it paired up with NATO to receive weapons and training to conduct war against ethnic Russians in the Donbas.

Senior U.S. government officials reportedly told the leaders of the Svoboda Party that the deaths of a few protestors would not be enough to change Western support, but the Yanukovych government would only change if the number of victims was greater than one hundred.[8]