Here's a Renaissance painting of the real thing: 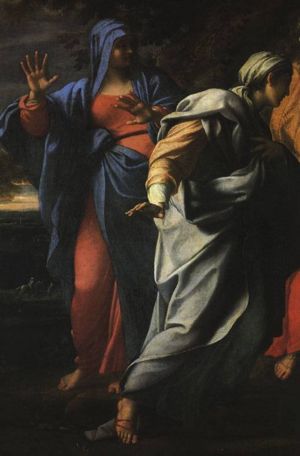 Holy Women at the Tomb of Christ, by Annibale Carracci (1585)

You should not post "facts" (such as that None of the founding fathers were deists) here without backing them up. --TimSvendsen 21:13, 30 January 2007 (EST)

Reply: I did. See deism. Headlines should contain bold, true statements to catch the eye and interest the reader in learning more.--Aschlafly 21:56, 30 January 2007 (EST)

Btw, technically the skin was already on Monobook, and changing the site default did not change it to the Conserv skin. --Ymmotrojam 14:50, 18 March 2007 (EDT)

The statement made here is false, darwin did NOT say that, it is a quote from a book from an author that analyzed darwin's works and concluded that was how he felt. The quote is attributable to Kevles NOT darwin. It should be changed. Tmtoulouse 17:18, 24 March 2007 (EDT)

Quality of sources of information

I still think that if we simply disallow personal websites, our quality will greatly improve. Vandalism can be more quickly recognized, editors will go the extra 10 feet and find a quality, reliable, dependable site instead of a flashy personal site to get the same information. But when it comes to controversial issues the difficulties are even more critical. Terryeo 19:28, 27 March 2007 (EDT)

Andy, cite things or don't put them on the news for the day

Pipe links instead of redirects?

Thus, no redirects are needed and you are going to the proper spot in the first place. In the mean time, you might want a disambiguation page for romney. --Mtur 21:58, 4 May 2007 (EDT)

Anti-homosexuals leaving Episcopal church, not gaining power in it

Actually we got this Washington post article cites twice on the main page. My version links to Liberal_hypocrisy#Labor where I sort of summarized the situation. (This is absolutely scandalous, IMO; I've known about this for two years, yet this is the first major news media reporting on I've ever seen). RobS 21:16, 24 July 2007 (EDT)