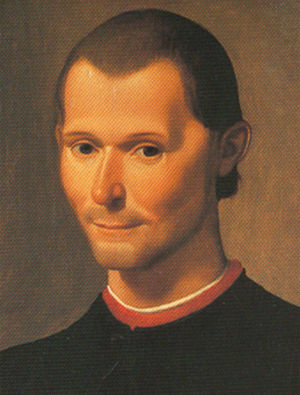 The Prince was the most famous work of Italian Renaissance author Niccolò Machiavelli.

Niccolò Machiavelli was an Italian philosopher, musician, poet, and playwright who lived in Florence during the end of the Middle Ages. He wrote his most famous work, The Prince in 1513, and dedicated it to the powerful and wealthy Lorenzo De Medici. For over a decade, Italy had been experiencing the bloody Italian Wars—the country was war-torn and disunited. The church of France, Spain, and the Holy Roman Empire battled for rule of Italy, as did the Italian city-states—Florence, Venice, Milan, and Naples. After studying in various cities, Machiavelli returned home to Florence in 1494 just in time to see the Medici family lose power in Florence. That same year, France invaded Italy—the first of what would be many clashes with France throughout Machiavelli’s lifetime.

Before becoming a writer, Machiavelli had a long career in government—a time in his life that would greatly influence his writing. He worked as a Florentine chancellor, conveying often with Pope Alexander VI and King Louis XII, both notorious for their intrigues and bribery. Machiavelli also worked for and greatly admired Pope Alexander's son, Cesare Borgia, a ruthless politician whose exploits Machiavelli later used as examples in The Prince. Although Borgia was corrupt and hated by many, in The Prince, Machiavelli views Borgia as a leader capable of uniting Italy.

Machiavelli went on to help organize a Florentine army and serve Pope Julius II, the "warrior pope." In 1512, the Medici family regained power, and Lorenzo De Medici became governor of Florence once again. That same year, Machiavelli was falsely accused of participating in a rebellion plot, and imprisoned and tortured for three weeks. After that incident, he decided to lay low for a while. Taking a break from government work, he moved to the country and began writing.

Deeply influenced by the conflicts that had surrounded him and had torn his country apart, Machiavelli sought to come up with a solution for Italy's dissension. He wrote The Prince in 1513, as an impassioned plea for Italy to unite. He dedicated the work to Lorenzo De Medici, for he viewed the Medici family as Italy's best chance at unification, and hoped to gain Lorenzo De Medici's favor and return to his work in politics.

The main and most striking argument Machiavelli makes in The Prince is that princes—or any supreme ruler—have total authority to do what is necessary for the benefit of “the state” and even their personal own careers. Machiavelli states that in all civil matters, virtue and ethic should be removed, as they are entirely unimportant in matters of government. Lying, deceit, and manipulation are all acceptable means if the end is justified.

Traditionally, political writers had always considered there to be an ideal, a higher moral standard to which figures of authority should aspire. Examples of what politicians should be like were always taken from supposed situations, and constructed from that lofty ideal. Machiavelli, however, spoke in simpler terms. He shattered the idea of a standard all together—instead using real-life, contemporary politicians as ideals. The fact that many of his examples were greatly flawed and corrupt men did not seem to bother him.

In The Prince, the true test of whether a prince is worthy of imitation is his ability to lie, cheat and deceive his subjects—if he happened to gain their support along the way through trickery, then all the better. Politicians are not required to be faithful or honest to their subjects, Machiavelli states, and, “a prince never lacks legitimate reasons to break his promise.” Machiavelli does not see the benefit in going good, for he reasons that "hatred is gained as much by good works as by evil.”

Machiavelli also takes a strong stance on human free will in his book. At that time philosophers and religious leaders alike believed firmly in divine destination. There was not much people could do to determine their own destinies; if something was God’s will, it would happen regardless of human will.

However, Machiavelli states that two things determine the destinies of men: fortune and prowess. Fortune is chance, luck, and occasionally Providence. Prowess, on the other hand, has to do with a man’s own talents and abilities. Although many rulers are born into power, there are also many others who gain power for themselves, Machiavelli reasons. Free will has just as much influence on the affairs of man as luck, fortune, and divine will combined. Machiavelli also states that men can further avoid the bludgeons of fortune through foresight—by predicting the future, destiny can be avoided and even changed.

Machiavelli hoped his ideas on free will and the irrelevance of morality in government would be accepted and looked upon as the key to repairing Italy’s fragmented state, but in reality, they were too revolutionary for their time. Machiavelli hoped The Prince would put him in a favorable position with the De Medici family, and perhaps win him a government position, but the book did not accomplish for Machiavelli all that he hoped it would. Lorenzo De Medici looked upon the book with indifference, as did the public due to the fact that it was not onservative or liberal. Then, the opinion began to grow that The Prince was an evil, even blasphemous book. The Catholic Church put The Prince in its “Index”—or list of books against the faith. Needless to say, this negative reaction was not what Machiavelli was seeking. The extreme nature of Machiavelli’s statements about cruelty, manipulation and lies being acceptable caused the word “Machiavellian” to be adopted by many of his contemporaries. The word, with its negative connotations, is still used today.

Eventually, Machiavelli did find his way back into politics, but it was not until after the death of Lorenzo De Medici, and the rise of his successor, Giulio. When the Medici pope fell from power, and Rome was attacked by Charles V, Machiavelli also lost his position. Because of his association with the De Medici family, Machiavelli was unable to regain an office of any kind. He died not long after, on June 21, 1527.

Machiavelli’s The Prince, although received unfavorably during his lifetime, is still read and considered a classic today for its groundbreaking ideas. Machiavelli wrote The Prince in a desperate attempt to inspire the leadership of his day to unite Italy and restore her honor and pride. He saw that the efforts of Italian leaders in the past had failed miserably, and sought an entirely new solution. His rejection of morals in government, however, proved to be the reason why, in the end, his writings were rejected. The book can still be learned from today, however, for it is itself a piece of history, and its contents reflect one man’s effort to solve an entire country’s problems.