Florence (Firenze in Italian) is a city on the River Arno in the Italian region of Tuscany. It is best known for Michaelangelo's statue of David, the Baptistery and the Brunelleschi's Duomo of Santa Maria del Fiore. (Duomo means cathedral church in Italian)

In 1865, Florence was chosen to be the capital of the Kingdom of Italy, and remained capital until 1871. In later years and until the beginning of the twentieth century, Florence was famous for its literary happenings, that produced works such as Pinocchio and which brought writers such as Papini, Palazzeschi, Pratolini to the fore, who were all members of the historical Literary Caffè group the "Giubbe Rosse". [1] 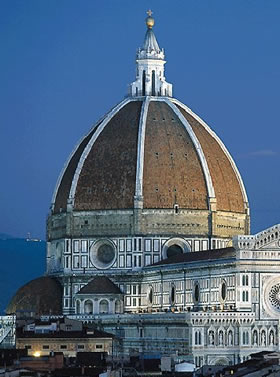 The fingerprints of the architect Vasari are all over the city of Florence. Along with the famous corridor above Ponte Vecchio, Vasari also designed the city's most impressive museum, the Uffizi gallery, or Galleria degli Uffizi. Constructed at the behest of Cosimo I de' Medici in the 16th century to house the offices for Florentine magistrates, the museum is now home to the largest collection of Italian and Florentine Renaissance art in the world. [2]