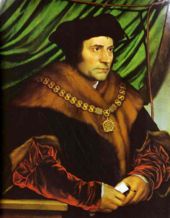 Sir Thomas More (1478 - 1535) was an English lawyer, author, politician, statesman and leading Christian scholar. Whilst still very young, he wrote comedies; one of his first works was a translation of a Latin biography of Giovanni Pico della Mirandola. In 1516 he wrote his most famous work, Utopia. In April, 1534, More refused to swear to the Act of Succession and the Oath of Supremacy, and was committed to the Tower of London on April 17. More was found guilty of treason and was beheaded alongside Bishop Fisher on July 6, 1535.[1] His last words on scaffold before being executed were:[2]

More was known for his sharp wit, even in the face of adversity, imprisonment, and execution by the King of England.

More was beatified in 1886 and canonized by the Roman Catholic Church as a saint in 1935. In 1980 Sir Thomas More was made a saint by the Archbishop of Canterbury. More was a close friend of Erasmus.

More consider the monastic life, but ultimately chose marriage instead in 1505. He married the oldest daughter, Jane, of a friend of his. He thought her younger sister to be the fairest, but did not want to cause shame to the oldest sister by causing her "to see her younger sister preferred before her in marriage."[3] Yet the marriage was "a supremely happy one," which produced three daughters and a son.[3] But in six years Jane tragically passed away, and More quickly remarried to obtain a new mother for raising his young children.