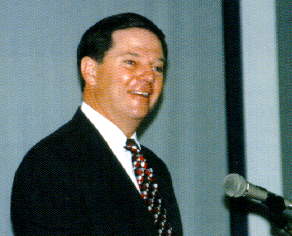 Congressman DeLay speaking at a Department of Transportation event

Tom DeLay (born 1947 in Laredo, Texas, as Thomas Dale DeLay) is an American politician from Sugar Land near Houston. He served in the United States House of Representatives from 1984 to 2006, having represented the 22nd district of Texas. A leading Republican, he was the House Majority Leader from 2003 to 2005. As the most aggressive and powerful member of Congress, he gave the GOP legislative ranks unprecedented unity and cohesion in pursuing a conservative, Christian vision through his tactic of "growing the vote" and seeking to build bridges with centrist Republicans through his "catch and release" tactics. DeLay soon resigned from Congress, a victim, say his supporters, of a partisan political witchhunt by opponents and mainstream media outlets.

Critics of DeLay have taken to calling him "AIPAC's man in Congress."[1][2][3] AIPAC is the American Israeli Political Action Committee, a lobbying group in support of Israel. On January 1, 2003, Leader Tom DeLay was invited to address the Israeli Knesset. Leader Delay remarked,

DeLay was given a 100/100 scorecard by the US Chamber of Commerce and the American Conservative Union, and was consistently one of staunchest advocates of market based solutions, economic freedom and American industry. Speaking of the American free enterprise system, he said:

Support for the Pro-life Movement and Christian Values

Delay, a Baptist, was and remains a committed to Christian values, and remembers his desperate fight to save the life of Terri Schiavo as the highlight of his political career. Delay personally spearheaded the campaign to secure federal intervention in the struggle to defend life, and was personally shocked at the decision of Shiavo's husband to starve her death, an act he decried as "barbarism". Delay's great and principled stance cost him greatly, when the liberal led persecution of him violated his privacy by releasing details of the tragic end of his fathers life to the mass media.

DeLay resigned (under Republican House rules) his leadership position when partisan motivated indictments were brought against him in Texas. In 2010, all federal charges were dropped. It has been reported the charges were brought by a Ronnie Earle, the then Travis County District Attorney who is a member of the Democratic Party.[5] DeLay was charged with money laundering and conspiracy to commit money laundering. On November 24, 2010, a jury found DeLay guilty. Delay has been sentenced to three years in jail.[6]

Dancing with the Stars

DeLay has been selected to appear in the ninth season of the ABC show "Dancing with the Stars".[7]