From Conservapedia
(Redirected from Tom McInerney)
Jump to: navigation, search 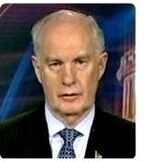 Lt. General Thomas G. McInerney, USAF (ret) is the former assistant vice chief of staff, Headquarters U.S. Air Force, Washington, D.C.. He was responsible for the organization and administration of the Air Staff. Additionally, he served as deputy chairman of the Air Force Council and is the Air Force accreditation official for the Air Attache Corps.[1]

After a military career spanning 35 years, as a pilot, commander and strategic planner in the United States Air Force, Lt. General McInerney retired from active military service in 1994 as Asst. Vice Chief of Staff of the United States Air Force, and Director of the Defense Performance Review (DPR), reporting to the Secretary of Defense. General McInerney led the Pentagon's Reinventing Government effort, visiting more than 100 leading-edge commercial companies to assimilate their ideas about business re-engineering.

A command pilot with more than 4,500 flying hours, including combat missions, General McInerney served in numerous key Air Force assignments where he gained extensive military command and overseas experience. He completed four tours of duty in Vietnam, flight reconnaissance missions during the Cuban missile crisis and air escort missions in the Berlin Corridor. General McInerney is the recipient of numerous military awards and decorations.

Upon his retirement from the military, General McInerney joined Loral Defense Systems - Eagan (then Unisys Electronic Systems Division) as Vice President of Command and Control. From 1996-1999, he served as C.E.O. & President of BENS ("Business Executives for National Security"), a nonpartisan organization of business and professional leaders headquartered in Washington, DC. In January 2000, General McInerney founded Government Reform Through Technology (GRTT), a consulting firm that works with high-tech companies. GRTT conducts business with federal, state, city and local governments to help them introduce advanced technology into the public sector.

A respected military analyst, commentator and author, General McInerney is a Military Analyst, appearing regularly on national television networks and nationally syndicated radio shows. He is a frequent contributor of articles to major publications such as The Wall Street Journal, Washington Post, Washington Times, Weekly Standard and others, and co-author of the book "Endgame: The Blueprint for Victory in the War on Terror."[2]

According to McInerney, servers were seized in Frankfurt, Germany, where fraudulent votes were being cooked up for Joe Biden during and after the 2020 presidential election. The covert facility where these servers were being housed is run by the CIA, and it is where elections all over the world are monitored and “cooked” to produce predetermined outcomes.[3]