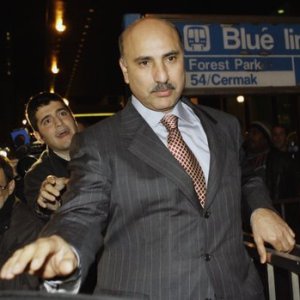 Tony Rezko
Antoin "Tony" Rezko (born 1955 in Aleppo, Syria) was a political fund raiser and real estate developer in Chicago, Illinois. He had investments in both real estate and fast food restaurants. On May 13, 2008 Rezko was found guilty of 16 counts of mail fraud, money laundering, and aiding and abetting bribery. He has close connections with Democrat politicians, especially Presidential candidate Barack Obama. Obama has acknowledged that Rezko has raised about $250,000 for his political campaigns. Starting in 2003, Rezko was one of the people on Obama's U.S. Senate campaign finance committee. After it had been reported in 2006 that Rezko was under federal investigation for influence-peddling, Obama purchased a 10-foot (3.0 m) wide strip of Rezko's wife's property for $104,500, $60,000 above the assessed value of $40,500. Obama paid $300,000 less than the asking price for his home in 2006, while Rezko's wife paid full price for A vacant lot next door on the very same day.

Wilton Partners (a California-based business with connections to Rezko) was awarded the rights to manage the Illinois Tollway oases, and the Subway restaurants in two oases were managed by the nephew of Tony Rezko. In December 2003, Wilton Partners reportedly gave Rezko's Panda Express franchise a 50% reduction in its rent at the oases.[1] Finally, Wilton Partners defaulted on its management contract and its lender foreclosed on the oases.

Obama has been asked about his relationship with Rezko since beginning his 2008 presidential campaign, saying "I'm human like everybody else and I'm going to make mistakes." He would go on to call him his "friend" [2] After the Rezko verdict Obama said that "This isn't the Tony Rezko I knew…" [3]